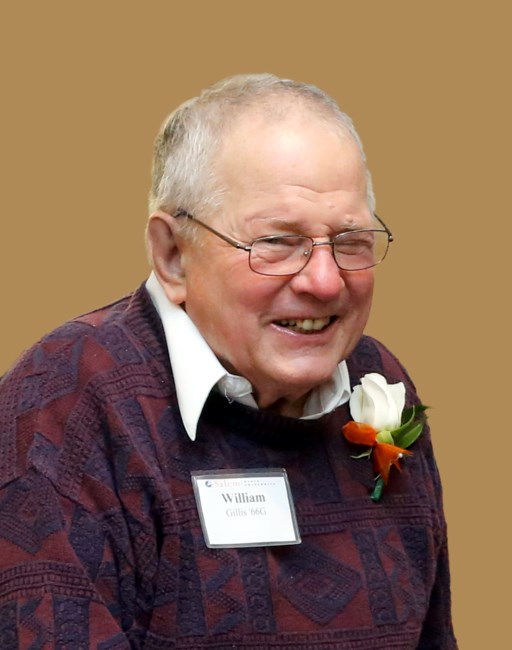 A "true Marbleheader", Bill was born at the former Mary Alley Hospital on Franklin Street on January 25th, 1937 and remained a life-long "Header", marrying his high school sweetheart, raising his family, and fishing and boating on the waters of his youth, in and around the granite shores of the town he loved. A life-long educator, mentor, and coach, his legacy lives on in his former students, athletes, his wife, his children, grandchildren, and great-grandchildren, and all that knew and loved him for his grit, candor, easy humor, and compassion. Bill passed on April 13th, due to complications from Parkinson's disease, which he had fought with strength and grace for over 25 years. He was the son of the late Katherine (Uhlar) and William Gillis and was raised by his mother, along with his siblings, Lillian, Kathy, and Bobby, after the death of his father when Bill was just ten years old. As a child and teen, Bill's life revolved around the heart of downtown Marblehead - the Gerry School, his family's grocery store (Mandy's), the athletic fields, and the outer harbor and Fort Beach area, where he lobstered and worked for local fisherman. Pine Island, Florida, was another influence in his early life. Bill had enduring memories of taking the train to Florida, filled with servicemen during the WWII years, to work on the farm of his maternal grandparents and commercial fish with his uncles in the shallows of Pine island sound. Bill attended Marblehead High School where he excelled in athletics, captaining the football and track teams his senior year. Upon graduating in 1955, Bill attended Cushing Academy and the University of Connecticut on football scholarships. As a scholarship student at Cushing, Bill worked in the kitchen in the dining hall and was required to play three sports. In addition to track and football, he was the hockey goalie on the undefeated 1956 team. At Connecticut, he earned a Bachelor of Arts in Education, was a letterman and starting offensive guard on the football team, and a member of the Sigma Nu fraternity. While in college, Bill eloped with his high school sweetheart, Sandra Perkins, and they were married in Seabrook, NH - a love that lasted the rest of his life. Upon graduation from UCONN in 1960, Bill began his career in education and continued his love of athletics by coaching. He taught at Danvers High School (1961-1962) and at Shaw Junior High in Swampscott (1962-1967), while coaching Swampscott High School football with the legendary Stan Bondelevitch and Dick Lynch. He completed his Master of Education in 1966 and became a professor at Salem State University, where he taught and coached until he retired in 1998. During his tenure at SSU, Bill served as the chairperson for the Sport, Fitness, and Leisure Department, coached baseball, and started the cross-country program, weight training program, and the athletic training program. He served as Athletic Director from 1975-1980, overseeing the construction of the O'Keefe Center and bringing Salem State athletics into the NCAA. Bill was awarded professor emeritus status upon his retirement and was named to the Salem State University Athletic Hall of Fame. As a life-long believer in the lessons learned in athletic competition, a scholarship recipient, and having lost his father at a young age, his office was always open to those in need and was a place where student-athletes would congregate from morning till night. A group of hockey and track team members have continued to meet annually, with "Coach Gillis" as the guest of honor. Above all, Bill was a devoted and cherished husband, father, grandparent, and great-grandparent. His family will always treasure his unwavering athletic, educational, and emotional support as well as his humor and youthful embrace of life. Whether telling stories, cheating at checkers, drawing treasure maps, or playing soldiers he was always focused on his beloved family. Grandchildren and great-grandchildren eagerly spent afterschool hours, weekends, and holidays playing at "Nanny & Grampa's" or out fishing on the "Mandy". Bill could always be found somewhere along the sidelines, track-side, or in the bleachers supporting the young athletes in his family and he was always there after the contest to encourage and congratulate them on a game well-played or race-well run regardless of the numbers on the scoreboard. Bill is predeceased by his father, William, his mother, Katherine, and his infant daughter, Terry Lyn. He is leaves his wife, Sandra, and four children, Pamela (Gillis) and Jeffrey Flynn, Wendy Gillis, William and Lisa Gillis, Andrew and Lauren Gillis; nine grandchildren, Kimberly (Flynn) and Eric Ridge, Kristin (Flynn) and Jesse White, Kailey, Jeremy, Liam, Matthew, Aidan, Lily, and Benjamin Gillis; and five great-grandchildren, Peighton, Owen, and Connor Ridge, and William and Millie White. He is also survived by his sisters, Lillian Till and Katherine Gillis; and brother, Robert Gillis. The family would also like to thank the many neighbors and friends that meant so much to Bill and the health care workers that cared for him. A special "thank you" to Dick Farrar, George MacDonald, Peter Gray, Hugh Bishop, Don Pinciero, Mike Gilligan, Bob Murphy, and Bill Goodwin for their lasting friendship. A Celebration of Life will be planned for a later date. Bill was a founding member of the Marblehead Magicians Gridiron Club and an avid supporter of Marblehead High School football. A scholarship has been established in his name so that others may benefit from his life-long commitment to athletics and education. Donations can be made out to the Marblehead Magicians Gridiron Club/William A. Gillis Scholarship, and sent to the Marblehead Magicians Gridiron Club, P.O. Box 505, Marblehead, MA 01945. Arrangements are under the care of Eustis & Cornell of Marblehead 781-631-0076. To share a memory or offer online condolences please visit eustisandcornellfuneralhome.com.
See more See Less

In Memory Of William A. Gillis Jr.