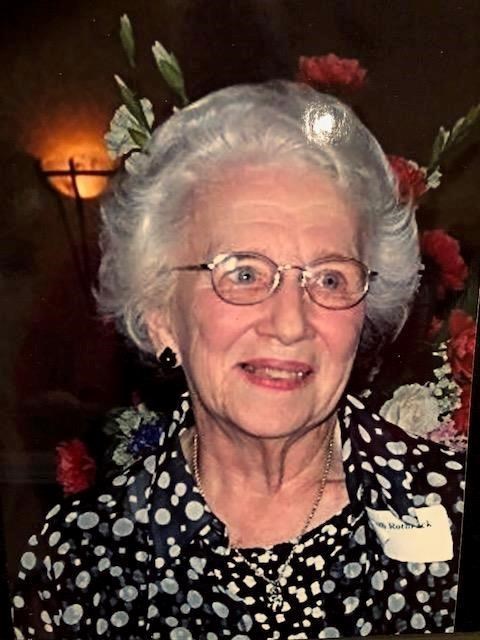 Ruth Henry Rothrock, 94, of Martinsville, who was active in the area’s business, civic and faith communities for decades, died Thursday, Jan. 11, 2018, at her home. Mrs. Rothrock’s life was focused on helping others, whether they were grieving the loss of a loved one, trying to grow a business or in need of financial help to further their educations. She was born Jan. 9, 1924, in Roanoke County, the daughter of Ella Clarke Henry and Rufus Albert Henry. She attended schools in Roanoke County and graduated from Andrew Lewis High School in Salem in June 1942. Following graduation, she joined Western Union at its Salem office. She worked in vacation relief for the company in several places, and came to Martinsville from Bedford on Sept. 28, 1942, to fill in for a week for a woman who was ill. That was in 1942 "and I'm still here," she said in a 2008 interview with the Martinsville Bulletin. Mrs. Rothrock worked at the Western Union office for five years, and she also did some bookkeeping at McKee Funeral Home (now Collins-McKee-Stone Funeral Home). There, she eventually met her husband, Thomas S. Rothrock Jr., who had come to Martinsville from Winston-Salem to work. Mrs. Rothrock joined Stone Transfer where she worked until her marriage in 1947, and in 1951 she became the bookkeeper for McKee Funeral Home. Following her husband’s death on April 21, 1963, she “took over where he left off” at the funeral home and became secretary of the business. In 1977, after the death of Ina McKee Holland, who owned the funeral home at that time, Mrs. Rothrock became vice president secretary of the company. She became a licensed funeral director in 1974. She and the late Herman B. Martin operated the funeral home until it was sold in 1986. Later, Mrs. Rothrock worked part-time for Collins-McKee-Stone Funeral Home. Funeral work "is a ministry. It's about helping people ... at a very hard time of their life," she said in the 2008 interview. "It's not easy, but it's a part of life." First Baptist Church in Martinsville played a central role in Mrs. Rothrock’s life. She became an active member of the church in 1946 and the following year, Dr. James P. McCabe, then the senior pastor, and Dr. Chevis F. Horne, then McCabe's associate pastor, married Ruth and Thomas Rothrock. Mrs. Rothrock served as a deacon and was active in the Women’s Missionary Union (WMU), serving as president and group leader, and in other programs. She was honored as a life deacon on June 17, 2009. She also was a member of the Mary Kirk Bible Class, which she served as president and treasurer, and the Martinsville Hospital Auxiliary. She was the first chairman of the Baby First Photo. She was active in numerous organizations including Beta Sigma Phi International Sorority, of which she was a life member. She also was a member and past committee chairman of the Virginia Funeral Directors Association and was the first woman member of the Martinsville chapter of SCORE, the nation’s largest network of volunteer, expert business mentors. Mrs. Rothrock was a member of the Martinsville-Henry County Chapter of Altrusa International Inc. She had done bookkeeping duties for the club since the 1940s, long before she could became a member because new members were not accepted until an opening in the membership rolls occurred. "Altrusa stresses education.", she said in 2008. "There's a lot of girls walking around here who got an Altrusa scholarship" to help them through college, and Mrs. Rothrock said she found it gratifying to hear from those women later. Mrs. Rothrock also volunteered at Patrick Henry Elementary School, Piedmont Arts and Grace Network, and she was the telephone chairman for the Piedmont Arts Guild. She was preceded in death by her parents; her husband; three sisters, Mrs. S.B. (Mildred) Dimond, Mrs. Jack (Martha Jane) Harrison, Mrs. I.S. (Margaret) Hartmann; and a brother, Rufus Albert Henry Jr. Surviving are two sons, James Albert (Jane) Rothrock of Glen Allen and Samuel Drury Rothrock of Martinsville; a brother, Walter Lewis (Virginia) Henry of Roanoke; three grandchildren, James Samuel (Rebecca) Rothrock of Waynesboro; and Thomas Dyer (Hannah) Rothrock of Houston, Texas, and Robert Coleman Rothrock of Atlanta, Georgia, and their mother, Allyson Rothrock of Martinsville; and five great-grandchildren, Henry, Emilie, Evelyn, Kate and Jack Rothrock, all of Waynesboro. The family thanks those who assisted Mrs. Rothrock, including the staff of the Emergency Department and the fifth floor nurses at Sovah Health-Martinsville, Mountain Valley Hospice, and caretakers Jeanette Jackson, Latoya Brown, Vanessa Gravely, Mildred Ramos and Kathy Patterson. The funeral will be held at 11 a.m. Tuesday, Jan. 16th at First Baptist Church in Martinsville. Burial will be private. The family will receive friends from 4:30 to 6:30 p.m. Monday at First Baptist Church. Memorial contributions in honor of Mrs. Rothrock may be made to Grace Network, P. O. Box 3902, Martinsville, VA 24115; Piedmont Arts, 215 Starling Ave., Martinsville, VA 24112 or First Baptist Church, 23 Starling Ave., Martinsville, VA 24112. McKee-Stone Funeral Home in Martinsville is in charge of arrangements. To express condolences online, please visit www.collinsmckeestonemartinsville.com.

In Memory Of Ruth Henry Rothrock