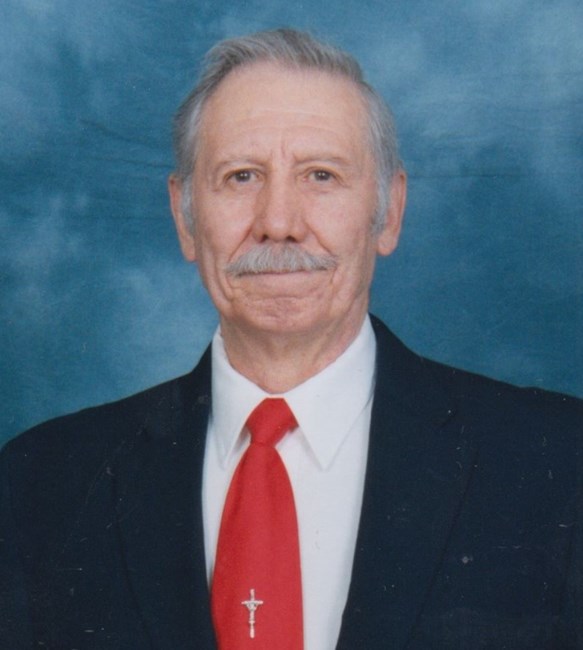 Carlos Enrique Castaneda, 86, passed away peacefully at home at 10:33 am on Friday, July 29, 2022 with his loving wife at his feet and his beloved daughter holding his hand. Carlos was born July 8, 1936 to Enrique and Mercedes P. Castaneda. Carlos graduated from El Paso High School (Texas) and from Texas Western University (now UTEP). He worked one summer at Fort Bliss before entering the US Navy in Pensacola, Florida where he trained to be a pilot. He was later stationed aboard the USS O'Hare in Norfolk, VA. This is where he met the love of his life, Linda, and was happily married for just shy of 62 years. After his Navy service, he was an electronic technician for the city of El Paso, TX. He was then recruited to become a special agent for the FBI and excelled in the technical field. His career took him to offices in San Diego, Chicago, Washington DC (Vienna, VA), and Charlotte, NC. He retired in Charlotte NC after 26 years of service. Faith was very important to Carlos and he was involved with St John Neumann Catholic Church in the ministries of the charismatic movement, RCIA commission, Cursillo, Catechist, prayer group, and Lector. He was a member of the American Legion and NARFE. Carlos was like one of the unforgettable characters that you read about in Readers Digest. A wonderful man, so faith filled, and dedicated to ministry. He was a great example and inspiration to many. He was happy, always smiling, and always willing to help; he was a good man. Loved group hugs; he was kind, generous, and always up for conversation. He was loving, fun, humble, and a ham. He enjoyed social dancing, the theatre, and traveling with Linda. He never met a stranger. Carlos is pre-deceased by his parents; his parents-in-laws, William Lloyd and Maxine Stubbs; his sisters-in-law, Betty Stubbs Carter (Clem), Rita Stubbs White (Fitchew); his brothers-in-law, Jack Stubbs, Robert Joseph Stubbs, and Carl Stubbs; his step-grandson, Samuel "Sam" Medrano; his cousins, Chavela Ornelas, Isela Nunez, and Tichi Ramos He is survived by his wife of 61 years, Linda Castaneda; his daughter, Lisa Castaneda; his sisters-in-law, Shirley "Baby Sister" Stubbs, Pat Stubbs, and Nellie Stubbs; and his cousin "sister," Julieta Zamarripa; his lifelong friend, Elza Felix; his nieces, Karen Lyon (Wayne), Tracey Santis (Dan), Amy Cook (TJ), Jen Wilson (Lyn), Leigh Ann Stubbs; his nephews, Jack Stubbs Jr., William "Van" Stubbs (Jessi); and a host of great and great-great nieces and nephews. Memorial services will be announced at a later date. A special thanks to Sheila Black of Atrium Health Senior Care; Bill Botkin for his friendship and assistance; and the Hospice Team of Union County, Crystal, Christine, Andrea, Kay, Jakea, Eunice, and Carl. In lieu of flowers, please consider a donation in Carlos' name to NARFE - Alzheimer's Research (Chapter 105), 225 N. Michigan Avenue, 17th Floor, Chicago, IL 60601-7633; or St. John Neumanns Catholic Church.
See more See Less

In Memory Of Carlos Enrique Castaneda