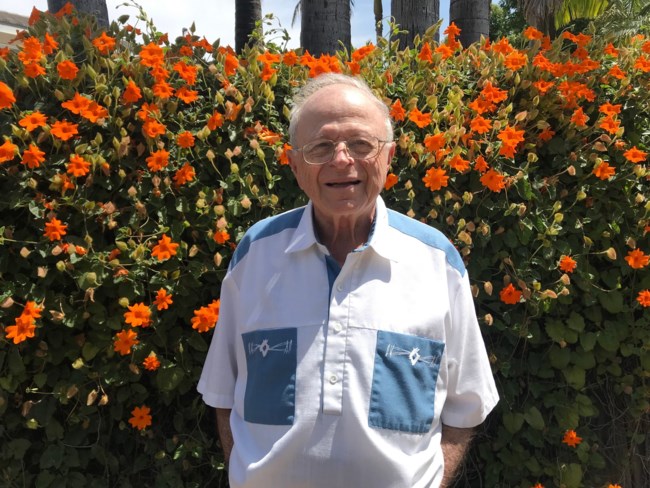 It is with sadness that we announce the passing of Dr Harvey Socol 86, who passed away on Saturday October 24, 2020 in Brea, CA. Son of the late Albert and Rose Socol, Harvey was born in Toronto, Canada on June 6, 1934. He married Elaine (Rossman) in 1958. Harvey graduated in Biochemistry & Physiology in 1956 and in Medicine in 1960 from University of Toronto, where he enjoyed playing basketball and volleyball. Harvey was a well loved family doctor for 17 years in Richmond Hill, just north of Toronto. He was on staff at Branson Hospital in Toronto, Newmarket Hospital in Newmarket and York Central Hospital in Richmond Hill. They lived in Richmond Hill for many years, then moved to Thornhill, but he maintained his office in Richmond Hill until 1977. Harvey, Elaine and 2 young sons then moved to Fullerton, California, following his parents and younger brother, who had left Toronto for Los Angeles 15 years earlier. In Fullerton, they became active members of Temple Beth Tikvah. Harvey practiced Industrial Medicine and soon became medical director of several clinics in the surrounding areas of Pomona, City of Industry, Ontario, and Riverside. He continued in Industrial Medicine for 27 years. One of his most pleasant experiences was as a volunteer doctor at the 1984 Olympics held in Los Angeles. After undergoing heart surgery in 2004, Harvey retired and enjoyed new friendships while playing golf and traveling extensively with his wife until recent years. They enjoyed yearly visits with their many friends in Toronto, attending reunions of his medical school graduating class every 5 years. This summer the class would have held their 60th Anniversary reunion in Toronto If not for Covid-19. In retirement Elaine & Harvey enjoyed their love of classical music as well as Dixieland jazz, attending multiple jazz festivals throughout the local areas. They were also members of ORT America and City of Hope while supporting many other organizations in Southern California and elsewhere. In October 2019, Harvey became a resident of Silverado Memory Care in Brea. As one of their first residents, he was well loved and well cared for. They called him Dr. Harvey, where he never lost his sense of humor and the twinkle in his eyes. He loved his wonderful caregivers and gave it a good fight with their help. Harvey was so proud of his family. He is survived by his loving wife and partner of 62 years, Elaine, their son Dr. David Socol and family, their son Marc Socol, wife Margie and grandchildren Anna and Julia in Nashville. Also survived by his brother Lionel Socol, wife Carol, and niece and nephew Alison (Ali) Bernstein and husband Dennis and children Lily and Casey, nephew Randy Socol, wife Heather and children Skyler and Eve. Survived by sister-in-law Gert Rossman in Toronto, nieces Wendy Bellemore in Calgary and Carolyn in Toronto and their children Maurie, Matt and Billy. Also Wendy’s daughter Sarah, husband Michael and grandchildren Jayda & Robert. Harvey leaves cousins in Israel, Buenos Aires, Los Angeles & Chicago. Special thanks to the caring staff at Silverado Memory Care, Brea and to his very special caregiver, Ivy from Home Care Assistance. Funeral at Pacific View Memorial Park in Corona Del Mar, California on Tuesday, October 27, 2020 at 11:30. In consideration of Covid-19, services will be conducted at graveside. For those unable to attend in person, the funeral will be broadcast live in Zoom. The family will be observing a virtual shiva Tuesday Oct 27 and Wednesday Oct 27 at 7 pm. In lieu of flowers, donations can be made in Harvey’s name to Temple Beth Tikvah in Fullerton, ORT America, City of Hope, Congregation Ner Tamid in Rancho Palos Verdes or any charity of your choice.
See more See Less

In Memory Of Dr. Harvey Socol