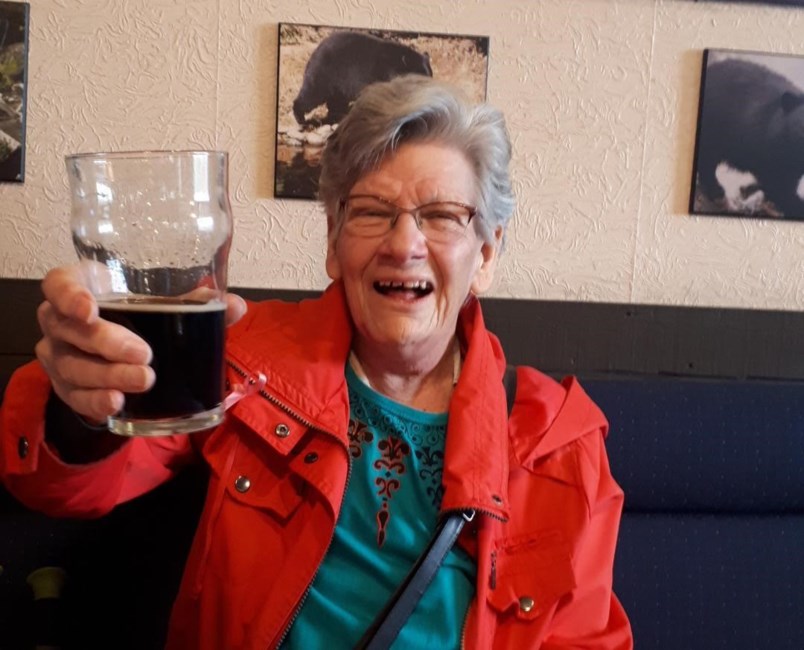 After a difficult battle with cancer, Alice Marie Dietrich passed away peacefully at home on January 18, 2023, surrounded by her loved ones. Alice was predeceased by her husband Carl (1933-2007), and daughter Rayanne (1966-2018). She is survived by daughter Rosemarie Ganassin and son Robert Dietrich, Rosemarie’s children Mark, Eric and Katie Ganassin and Robert’s children Jessica, Jillian, John and Joshua Dietrich and Michael Fox. Her great-grandchildren are Dylan, Molly, Elliot, Desmond, and Marsaili Ganassin, Alexander Fox, and Matteo MacDonald. Alice was born in December 1938 as Irene Marie Banks, and was adopted by Clarence and Catherine Baechler, who raised her with much love. Her childhood was spent in Saint Jacobs and Saint Clements, Ontario. In the summer of 1953, she met our father, Carl Dietrich, at Wasaga Beach and immediately fell in love. Their early romance was complicated by Mom’s illness, Guillian Barre Syndrome, which sent her to hospital and threatened her life. She overcame it and together Mom and Dad went on to have three children, Rosemarie, Robert and Rayanne. After the early interruption to her education, she completed high school as an adult learner in Kitchener, Ontario. She started working at a Hespeler company, Waterloo Textiles, as a secretary and bookkeeper. When the owner passed away, she and the factory supervisor purchased the company and ran it successfully for many years. At age 55 she sold her share of the business and retired. Alice and Carl moved frequently and never stayed in one place for long. Before retirement, home was generally in the Kitchener and Cambridge area. At various times they had cottages on Lake Huron, and rural Hanover. After retirement, they moved to Pigeon Lake near Bobcaygeon, until they moved to Port Rowan. They spent winters in a mobile home in Florida, first near Fort Myers and later at Aqua Isles in La Belle. In January 2019, following Rayanne’s death, Alice moved to British Columbia to live with daughter Rosemarie. Our mother, Alice, was one of the strongest and most courageous women to ever walk this earth and our family was blessed to have her as the head of the family. Her later years were plagued by disease and disability, but she faced every challenge in her life with courage and dignity, and her wonderful sense of humour. We will never be able to fill the space she left behind. Mother, you will always be in our hearts, and we will never forget you. We love you so much. Rest in peace. Alice requested no services be held and that her ashes be spread. In lieu of flowers, please send donations in her name to the First Unitarian Fellowship of Nanaimo, where she attended Sunday services, or to the Brain Tumour Foundation of Canada. First Unitarian Fellowship of Nanaimo: https://ufon.ca/become-a-member/donate/ Brain Tumour Foundation of Canada: https://www.braintumour.ca/ways-to-give/giving/
See more See Less

In Memory Of Alice Marie Dietrich