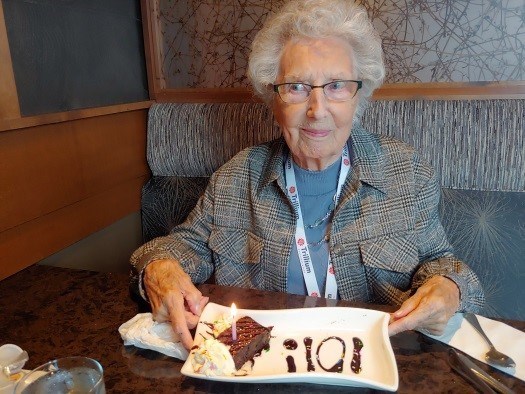 It is with great sadness that we announce the peaceful passing of Joan Louisa Evans, 101 years, at Woodgrove Manor, July 29. 2022. Predeceased by her husband, Jack, in 2005, she is survived by her only son, John (Janice), grandchildren Jay (Andrea), David (Gabriella), two great grandchildren, Alice and Hanna, and Joan’s younger brother Michael (Stella) Southwood. A British born woman from Watford, England, she had an uncanny way of rolling through life with unwavering resolve to just ‘get on with living’. With a stalwart and stoic nature, she saw more than most, the wonders of life, in war and peacetime, the ups and downs of the world; was born during the Spanish Flu epidemic and lived through today’s Covid era. During WW II she drove trucks with the ATS in London during the Blitz, a period which she often spoke of as being one of the most exciting times. She met and married her husband, Jack, during this period. In 1957, with their 10 year old son, they packed up and immigrated to Canada. Jack worked for Rolls Royce and Joan worked for Ayerst Pharmaceuticals Montreal, in the accounts department, for many years. On retirement, she and Jack packed up again and moved across county to follow their friends, settling in Qualicum Beach for some great years, then, to Nanaimo. We remember Joan’s strength, beauty and endurance and thank her for the example that she has set for us all. She is at a long awaited peace and we wish her a good flight to be with Jack. Our deepest thanks go out to the extraordinary staff of Woodgrove Manor, Nanaimo, who tenderly looked after Joan from 2021when her health and mental state began to decline. A gathering will take place at Cedar Valley Memorial Garden, Saturday, August 6, 2022 at 1:00 p.m. for an Interment Ceremony.
See more See Less

In Memory Of JOAN LOUISA EVANS