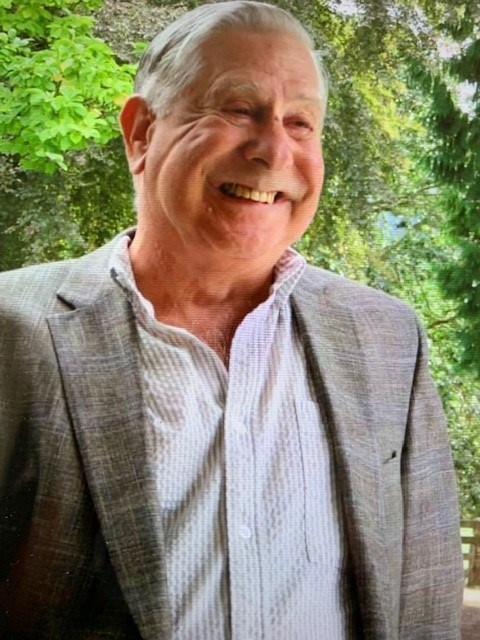 With profound sadness and much love, our family is sharing news of the peaceful passing of Merv Ellis – loving father and papa, on a beautiful island evening on June 21st, 2021 in Nanaimo, B.C. after his short and courageous battle with Cancer, at the age of 86. Mervin Lee Ellis, pre-deceased by his Mother Nettie, Father Guy, Step-mother Denise, Brothers Wilfred, Glen and Gordon, Sisters Ina (Danberg) and Irma (Carlson), his beautiful Daughter Valerie and his loving & adoring Wife Carol. He is remembered by his surviving children, Cathie Gaspard (Glen), Guy Ellis (Kim), Doug Glen (Karen), Robyn Brusnyk (Bob), John Ellis; his grandchildren Jillian Hewitt (Kyle), Marshall Gaspard (Tenille), Matthew Ellis (Laura), Paul Ellis (Laura), Taylor Glen, Laura Klepachek (Patrick), Andrea Klepachek (Dan), Kaedrin Ellis (Curtis), Sean Ellis; his great-grandchildren Sage & Sloane Hewitt, Blakely & Delilah Ellis, Henry MacDonald-Ellis; and extended family member Colleen Ellis - all of whom, were Merv’s “treasures”! He will be missed by his many nieces, nephews, cousins and friends from across western Canada and Michigan, USA. Merv was born in Prince Albert, Saskatchewan on August 23rd, 1934 and spent his young childhood in Canwood Saskatchewan helping the family with the local Hotel & getting into all kinds of mischief & fun that a small town brings. The family then moved to Courtney B.C. in 1944 where the family again, owned and managed the Riverside Hotel. After high school graduation, Merv then moved to Vancouver, B.C. in 1954 where he attended and graduated from UBC in Physical Education and a Major in Psychology. Merv was heavily involved in all athletics and while attending UBC, Merv was the Junior Gymnastics Champion for Vancouver Island and Pacific Northwest, B.C. Merv married his first wife and had his first two children Valerie and Guy. After a quick stint with student teaching, Merv joined the Department of Highways and directed road crews on the Hart Highway and Tsawwassen ferries causeway. He then started his own traffic control company, “TRACO”, and was the first to introduce women to the flagging role in BC and developed the protocols for large load escorting. On Dec 14, 1972 he married the love of his life Carol and quickly became step-dad to Cathie, Doug, Robyn and John and the family resided in Vancouver, B.C. He then went on as the Manager for Pacific Trollers Association and then in 1976, Merv moved the family to Edmonton AB as Merv took a position for Alberta Construction Association – first as Adminstrator and then as Executive Director where he worked until his retirement in June 1999. Merv was very active in hockey with all his sons playing hockey – he started coaching and eventually took on a keen interest in instructing and earned his National Coach’s Certification Program, Technical Levels 5, an honor awarded to few and developed programs and instructed at various hockey schools and published many articles on coaching. He designed the curriculum for the Olympic Solidary Hockey Program and represented Canada as visiting expert Instructor to deliver the program for the New Zealand National Ice Hockey team. Merv was also an avid fishermen, hunter, square dancer, card player, writer, musician (loved the keyboard, but could also play a wicked “gut bucket”)! But his biggest talent & love was that of “Papa” as the grandkids so lovingly called him. He loved his children and grand kids and great grand kids! The grand kids have many wonderful memories of “Cousins Camp” at Shushwap Lake with Nan & Papa that will last a lifetime! His children have fond memories of many family trips (camping, Disneyland, Arizona, Northern Saskatchewan etc), Merv’s BBQing expertise, and if you were honored to be invited to one of his famous Chinese food dinner parties, you were special indeed! His laugh and his wit and love for his family & his faith will forever live in our hearts! A celebration of life will be held at a later date in Celista B.C. In lieu of flowers, please donate to the Canadian Cancer Society – Prostrate Cancer Research. Merv’s family asks you to remember Merv by continuing to share the many stories that gave us so many laughs & moments of joy!
See more See Less

In Memory Of Mervin Lee Ellis