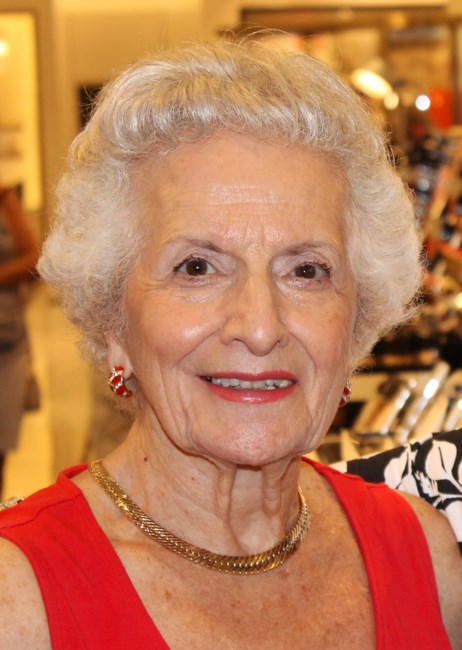 To Mary Blajian, age was just a number, and luckily for her dear family and friends, they were able to enjoy her company for 96 years, five months, and two days, until she peacefully passed away on January 3, 2023. She had a magnetic (and big!) personality – filled with love, grace, and wit. With her spunk and exploding heart, it was easy to forget that she only measured 5 feet tall (plus an inch or two in her heels!). Chalk it up to good things coming in small packages. Born in Jamaica Plain, Massachusetts, she moved to Forest Hills (NY) in 1946 with her parents and siblings. Shortly after completing secretarial school, she met her husband of 43 years, Albert, at an Armenian function in the Catskills, who immediately stole her heart. Prior to settling into their family home in East Brunswick, New Jersey, Mary and Al had short stints in Long Beach (NY) and Cleveland (OH). Mary managed to be very involved in the East Brunswick community – with roles in the Women’s Club, the Drama Club, and the Cub Scouts – all while putting her family first (and sneaking in a Bridge or Mahjong game with her friends). She was a devoted wife, mother, and grandmother, often found cooking elaborate meals and Armenian specialities for her family. There was never a dinner party of Mary’s that you attended that didn’t have enough food – a trait that she has instilled in her family to this day. Christmas was her favorite holiday and she sure did spread the holiday cheer, starting in October when she’d bake her famous fruit cake. When not in the kitchen, she enjoyed shopping until she dropped (grabbing four of everything – one for each child), playing roulette, catching the latest film releases with her grandchildren, dining and dancing, singing on Sundays at church, or traveling everywhere from Maui to Monte Carlo. Despite having spent most of her life in cold weather environments, Mary became a seasonal resident of Naples, Florida 40 years ago, and loved it so much that she permanently moved in 1999. She shared a special bond with each of her seven grandchildren, and they were the lights of her life. She was determined to be a “rockin’ grandma… not a rocking chair grandma!” and she surely did add the “glam” to “Glam-ma.” Mary will be forever missed, but her legacy will live on for generations to come. She is survived by her son Jeffrey Blajian (his wife, Jeanne), daughters Denice Blajian and Debbie Swansen (her husband, Steve), son-in-law William Burke, and grandchildren: Tara Swansen McGerigle (Chris), Trevor Swansen (Chelsea), Tyler Blajian, Jared Blajian, Taylor Burke, Emily Burke, and Chandler Burke. She was predeceased by her loving husband, Albert; daughter, Dawn Burke; sister, Rose Javian; brother, George Javian; and her parents, Hagob and Satenig Javian. Memorial services are scheduled for Naples, Florida as well as White Plains, New York as follows: Saturday, January 28, 2023, 11am St. William Catholic Church 601 Seagate Drive | Naples, Florida Saturday, March 25, 2023, 11am St. Gregory the Enlightener Armenian Apostolic Church 1131 North Street | White Plains, New York In lieu of flowers, memorial contributions can be made in Mary’s honor to Susan G. Komen: http://www.info-komen.org/goto/maryblajian Fond memories and expressions of sympathy may be shared at www.hodgesfhatnaplesmg.com for the Blajian family.
See more See Less

In Memory Of Mary Elizabeth Blajian