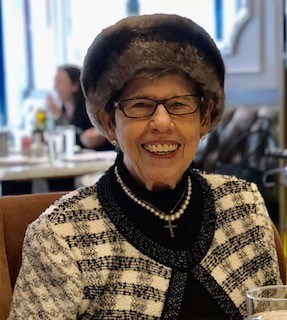 It is with great sorrow that her family announces the passing of Antoinette Cammarata Maselli on December 16, 2022. She was born on January 12, 1925, in New Orleans, LA, the youngest of seven children. She is predeceased by her parents, Michael and Maria Cammarata, her siblings, her loving husband of 63 years, Joseph Maselli, and her grandson Joseph Maselli III. Antoinette (fondly known as Nini) is survived by her 4 children, Joseph (Donna), Frank, Jan (Jim Mann) and Michael (Stacy) as well as 8 grandchildren, Caroline Maselli Crawford, Matthew Mann, Annie Maselli, Chip Maselli, Bill Maselli, Michael Mann, Melani Maselli and Sandy Maselli and 3 great grandchildren, Olive Crawford, Rooney Crawford and River Mann and numerous beloved nieces and nephews whom she loved like her own children. Although Antoinette’s greatest joy was her family, particularly her grandchildren, her favorite pastime was traveling far and wide especially to holy places. One of her favorite spots in her beloved Italy was an intersection with a Church on each of its four corners. She felt so blessed and thrilled to have seen the Passion Play at Oberammergau in Bavaria, Germany. Another place she visited often was Medjugorje where she would sleep on a wooden floor to be near the site of the Apparitions. Nini loved children and she loved photographing their sweet faces on her trips abroad. One of her happiest memories was her time as a Cub Scout Den Mother for her sons. Her devotion to her Catholic faith was foremost and she was rarely without a rosary in her hands during the later years of her life. Nini was proud of her contribution to the war effort when she worked at Higgins Industries during World War II. She was also a knowledgeable sports enthusiast even until late in her life and she enjoyed keeping up with a wide variety of teams and players. At Tulane games, she would not leave early because she always believed they had a chance to win until the very end. She was not a quitter. She was a music enthusiast, a collector of music boxes and had a beautiful singing voice. She was singing at a USO dance during WW2 when she met her future husband, Joseph Maselli who had just been transferred by the US Army to Camp Plauche. Nini was a wonderful cook who loved sharing her meals, especially her Italian ones, with friends and family. One of her yearly highlights was her decades of riding a float in the first parading female Carnival krewe (Venus). She loved her little Crown Royal and water on those special occasions. Antoinette proudly supported her Alma Mater, St. Mary’s Dominican High School and her childhood parish, St. John the Baptist Catholic Church as well as her final parish, St Patrick’s Church. She was charitable to many organizations throughout the community and elsewhere which reflected her strong values and desire to help those in need. She never said “no” to a charitable request because she often recalled The Times-Picayune Doll and Toy Fund bringing her so much joy as a child during the Great Depression. She loved watching EWTN and was so proud to have known Mother Angelica. She was a member and founding member of organizations too numerous to mention. After her husband died, Antoinette became CEO of their family business, City Wholesale Liquor Co and she never stopped contributing guidance to the company. The team at City Wholesale were greatly valued by her. In lieu of flowers, please consider a donation to St. Patrick’s Church (which supports St John the Baptist Church) or a charity of your choice benefitting children in need. There were thousands of hilarious “Nini-isms” over the years because of her unique flair for life and way with words but her parting thought just days before she died when asked if there was anything she still wished she had done was to think about it and say No, she had done everything she wanted. Her final request (and there were many) was to send out Christmas cards that sent her love to her family and friends. Her family thanks her compassionate caregivers who were with her in the end, Raquel, Emma, Katrina, and Deedy. A Funeral Mass will be held at St John the Baptist Catholic Church, 1139 Oretha Castle Haley Blvd in New Orleans, on Thursday, December 22, 2022 with visitation beginning at 9 AM and Mass at 11 AM. The burial will be held at Metairie Cemetery following Mass.
See more See Less

In Memory Of Antoinette "Nini" Maselli