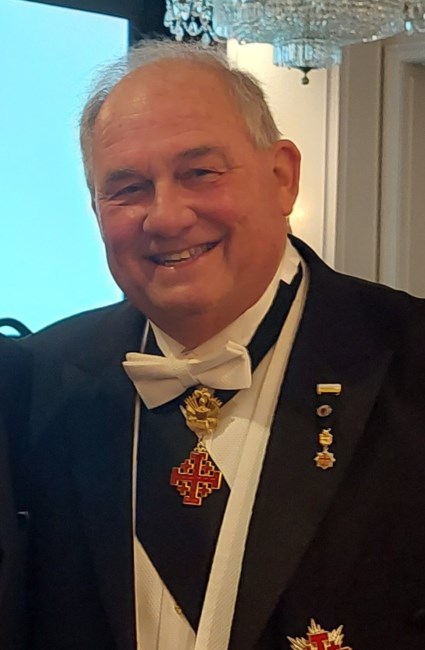 George Clarence Zimmer, Jr., died Sunday, January 22, 2023. George was a native of Arabi and moved to Prairieville a year ago. He was a member of St. John the Evangelist Catholic Church. He worked at Louisiana Power & Light from 1974 to 1979 and then Murphy Oil Refinery, which became Valero Refinery for approximately 30 years until he retired. George worked in operations and was a member of the firefighting team. He was a graduate of Holy Cross High School, New Orleans, LA 1971 and Delgado College New Orleans, LA where he received his Associate Degree in Electrical Technology – 1974. George was active with the Boy Scouts of America from 1982 until 2002 having achieved Eagle Scout in July 1970. George was active in the Knights of Columbus from 1994 to present,. having served in various offices including Grand Knight of the Father C.L. Hug Council # 10554 in Arabi, Louisiana from 1996 to 1997. George also served in various offices of the St. Bernard Assembly # 2181, Chalmette, LA including Faithful Navigator from 1997 to 1998. George served as Knights of Columbus Master of the District of Louisiana from 2004 to 2006. George was involved in many Religious, Civic, and volunteer organizations including semi-annual attendance at Manresa Retreat House in Convent, LA since 1994,. Abbey Youth Festival, St. Benedict, LA, Boy Scouts of America Scoutmaster for Troop 84, Our Lady of Lourdes, Violet, LA, 1982 to 1989; United Way for Greater New Orleans Annual Campaign and Louisiana Right to Life. He was formerly a member of the Krewe of Freret and Krewe of Babylon. George was invested into the Equestrian Order of the Holy Sepulchre of Jerusalem in 2002 and a member presently attaining the rank of Knight Grand Cross. He has travelled on Pilgrimages to the Holy Land multiple times proposing to his future wife, Ida LeBlanc Zimmer at the Church of the Wedding Feast at Cana in 2015. George was the Lay Master of Ceremonies for 8 years and was currently serving as Section President for the Archdiocese of New Orleans. He has received the Order of St. Louis IX Medallion from the Archdiocese of New Orleans in 2007. He also received the Order of St. Louis Award from the Fourth Degree of the Knights of Columbus in 2004. George was a member of the Order of the Fleur de Lis, a Catholic service organization, invested in 2017 attaining the rank of Commander. Preceded in death by his parents, George and Lorenza (Florence) Zimmer; brother-in-law, Leonard Wilfert. Survived by his loving wife, Ida of 6 years; his four sisters: Mary Ward (Robert), Theresa Wilfert, Geralyn Suhor (John Gerry), Barbara Sicard (Paul); 3 step-children, Danielle Waguespack (Wade), Renee Bigner (Wade) and Kyle LeBlanc (Joy); 11 step-grandchildren; and 7 nieces and nephews. An evening visitation will be held at Lake Lawn Metairie Funeral Home, 5100 Pontchartrain Blvd. New Orleans, LA on Friday, January 27th from 6 to 8 p.m. Visitation on Saturday, January 28th will be from noon until 1:30 p.m. at St. Dominic Church, 775 Harrison Blvd. New Orleans, LA. A Mass of Christian Burial will be celebrated by Archbishop Gregory Aymond at 1:30 at St. Dominic. There will be a private burial at a later date. In lieu of flowers, masses preferred or donations to St. Joseph Abbey, 75376 River Rd. St. Benedict, LA 70457 or Equestrian Order of the Holy Sepulchre of Jerusalem, 2955 Ridgelake Dr. Ste 205 Metairie, LA 70002.
See more See Less