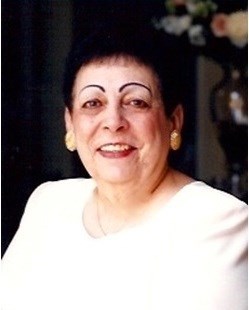 Hilda Medeiros Lagasse—beloved mother, wife, grandmother, great-grandmother and friend—departed this life on August 24, 2016, at her home in New Orleans. Hilda was born on December 8, 1931, in Fall River, Massachusetts, to Emily Moniz and Manuel Medeiros. She married Emeril John Lagasse, Jr., on February 11, 1949, at Santo Christo Church in Fall River, where Hilda and John resided as a couple for 43 years and reared three children. Hilda was a full-time homemaker who encouraged her children’s interests and talents; she served as the President of St. Anthony’s Band Club, was a talented seamstress, and a gifted cook. Her son, well known Chef Emeril Lagasse, began cooking with his mother at an early age; and he credits her for fostering his interest in the culinary arts, including teaching him how to prepare heirloom recipes from Hilda’s Portuguese family. In 1992 Hilda and husband John left Massachusetts and moved to New Orleans, quickly adopting the city as their new home. Hilda is survived by her husband of 67 years, Emeril “John” Lagasse, Jr.; her daughter, Dolores Maria Cotter; son Emeril John Lagasse, III (Alden Lovelace Lagasse); and son Mark Joseph Lagasse (Wendi Medeiros Lagasse), and six grandchildren and three great-grandchildren. Her grandchildren are Jason Robert Cotter of Ft. Lauderdale, FL; Jessica Lagasse Swanson (Steven Swanson) of New Orleans; Jillian Lagasse Yeum (Andrew Yeum) of Rutherford, NJ; Emeril John Lagasse IV and Meril Lovelace Lagasse of New Orleans and Destin, FL; and Katti-Lynn Lagasse of New Orleans. Hilda’s three great-grandchildren are Steven Jude Swanson, Jr. and John Peter Swanson of New Orleans, and Eleanor Grace Yeum of Rutherford, NJ. Hilda’s extended family includes a host of nieces, nephews, cousins, and friends. A Memorial Mass will be held Thursday, September 1, 2016, at 12 Noon, Lake Lawn Metairie Funeral Home, 5100 PONTCHARTRAIN BLVD., NEW ORLEANS, LA, 70124. Visitation will be from 9 am – 12 pm. The interment following the service will be private. The Mass will be celebrated by Father Leo A. Meyer. In lieu of flowers, the Lagasse family asks that donations be made to the Emeril Lagasse Foundation at emeril.org. St. Michael’s Special School will be the beneficiary of any funds donated in memory of Mrs. Hilda. To view and sign the guest book, visit www.lakelawnmetairie.com.
See more See Less

In Memory Of Hilda Lagasse