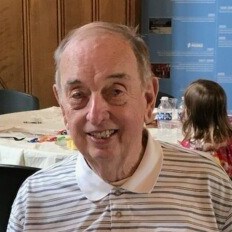 Jerry Kubnick of New Orleans passed away Sunday, July 31, 2022 at Touro Hospital. Jerry was born April 4, 1938 in Milwaukee, Wisconsin, the son of Herman and Myrtle (Ross) Kubnick. Jerry was raised in the Jackson Park Neighborhood on the South Side of Milwaukee. In Jerry’s words, “It was a good life. We were so lucky.” After graduation from Pulaski High School he attended the University of Wisconsin-Madison. There he earned a degree in Mechanical Engineering. That degree landed him a job with Boeing Airplane Department in Seattle, Washington. After several years he transferred to New Orleans, Louisiana. It was there he met and fell in love with a special New Orleans native, Marie Heyd. Marie and Jerry were married in November, 1965. New Orleans and Louisiana, so loved by Marie, became his home. Jerry’s career continued in the space industry with a stint on a military project for air lift landing vehicles for Textron Systems. He felt it was a privilege to work on a Boeing project for NASA, Saturn V launch vehicle for the Appollo Project to the moon. The last chapters of his career were in corporate management at Michoud Assembly Facility for Lockheed Martin building the External Tank for the Space Shuttle. Along with his career Jerry enjoyed playing his clarinet, listening to music, supporting the arts, sailing , skiing, fishing, biking, golfing, gardening and traveling adventures in the U.S. and other parts of the world. Jerry’s final chapter was at Poydras Home in New Orleans where his easy going manner and positive nature prevailed. Jerry’s family is grateful to the dedicated staff of Poydras Home for the excellent care he received with such warmth. The family is also deeply appreciative of the wonderful care Jerry received from the caring staff of Home Care Solutions-Metairie. Jerry is survived by sisters: Jean (Ron) Schmidt of Amelia Island, FL, Judy Goeckermann of Highbridge, WI, brother-in-law: Lee (Mary) Krueger of West Bend, WI, many nieces, nephews and their families, cousins and special Friends: Ron Jones of Diamondhead, MS and Tom Stock of Milwaukee, WI. He was preceded in death by his parents, wife, Marie, brothers: Norman and Gordon, sister: Joyce Krueger, brother-in-law: Kent Goeckermann, mother and father-in-law: Alma and Cletus Heyd, Sr., and friend: Pat Jones. Final resting arrangements were entrusted to Lake Lawn Metairie Cemeteries and Funeral Home. Interment will be at Lake Lawn Metairie. The family will celebrate Jerry’s Life at a later date in Milwaukee, WI. Online condolences may be left at www.lakelawnmetairie.com.
See more See Less

In Memory Of Jerry Lee Kubnick