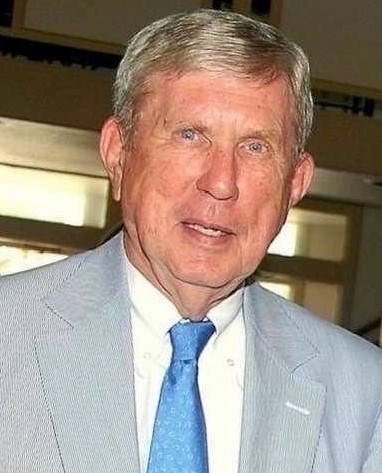 John Edward Faherty, Sr., passed away on July 17, 2021, at the Blake at Colonial Club Assisted Living Center in Harahan. He was 86.

John was born on March 2, 1935, in New Orleans, to Daniel Aloysius Faherty, Sr., and Genevieve Durand Faherty. He graduated from St. Rose de Lima Catholic School and Jesuit High School, both in New Orleans, and then earned a bachelor’s degree in chemistry from the University of Southern Mississippi in Hattiesburg. John earned a second bachelor’s, this time in history, several years later from Louisiana State University in Baton Rouge because he couldn’t stand not having a degree from his state’s flagship university.

Following his graduation from USM, John laid the foundation for a career in the petroleum business. Later, he was the founder and president of Crown Oil and Chemical Company, and then he purchased Sterling Petroleum Products, serving as the company’s president until his death. John’s professional accolades include serving on the board of directors of the Independent Lubricant Manufacturers Association from 1975 to 1981, and as president of the Independent Oil Compounders Association from 1978 to 1980. He also was a member of the National Petroleum Council.

John’s Catholic faith guided him throughout his life, and his dedication to Jesuit High School never wavered. John was a Jesuit man through-and-through and strived to live his life by the ideals set forth by his alma mater.

As such, he was active in several church parishes during his life. He served as a lector at both St. Francis Cabrini and St. Frances Xavier Catholic churches. And when John and his late wife of 50 years, Mary Frances Zimmerman Faherty, lived on the Northshore, he was an active member of Most Holy Trinity Catholic Church and helped with the building of its permanent church in Covington.

In further example of his Catholic faith, John was instrumental in forming a chapter of the Serra Club, which works to promote and foster vocations to religious life, on the Northshore, and was a faithful member of Manresa House of Retreats in Convent, where he participated in silent, three-day retreats for men.

A 1953 graduate of Jesuit, John was actively involved with his alma mater, both as an alumnus and as a father and grandfather when his son, Jack, and grandson, Patrick, were students. John loved all manner of sports and was a major contributor to the construction of Jesuit's John Ryan stadium. He also served as president of the Fathers’ Club at the Academy of the Sacred Heart when his daughter, Colleen, attended the school.

John served as president of Metairie Country Club, where he honed his skills on the golf course and tennis court, and was a member of The Stratford Club, where he enjoyed playing bridge with friends. John also loved his local sports teams, holding season tickets for both the Pelicans and the Saints, the latter for which he was honored as a 50-year season ticket holder.

Relatives and friends are invited to attend the Funeral Mass on Monday, July 26, at 11 a.m., at the chapel at Lake Lawn Metairie Funeral Home, 5100 Pontchartrain Blvd., in New Orleans, with Former Jesuit President Fr. Anthony McGinn presiding. Visitation will begin at 9:30 a.m. Interment will be in St. Louis Cemetery No. 3.

The family invites you to express your fond thoughts, memories and condolences online at www.lakelawnmetairie.com

In Memory Of John Edward Faherty,