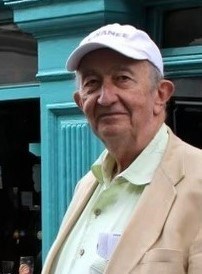 John Patrick Harkins, Jr. passed away Sunday, January 15th at Ochsner Medical Center surrounded by his family and friends after a year of several painful struggles with his health. He was 77-years-old. John was born on July 18th, 1945 in Jackson, MS to the late John Patrick Harkins, Sr. and the late Bobbye Roberts Harkins. He is survived by his two beloved children, Madeleine Drusilla Harkins Roy and David Walker Roy Harkins (Ann Pearman Blanchard Harkins), as well as his sister, Johnnita Harkins Cook (Alan Cook), and brother, Walter Michael Harkins (Susan Harkins). He also had several nieces, nephews, great-nieces, great-nephews, cousins and friends who will all mourn his passing. In boyhood, he was an active member of the Boy Scouts, attaining the rank of Eagle Scout, and a proud participant in the Civil Rights Movement of the early 60’s. He enjoyed being on his school’s debate team, where he met his life-long friend Henry Remm and the two would later attend Louisiana State University together in Baton Rouge, LA. John received a bachelor’s degree in history and was a member of Phi Alpha Theta and Phi Kappa Phi. He subsequently spent several years as a Catholic schoolteacher and counselor in New Orleans and Mississippi, save a year at the University of Michigan where he received a Master of Arts degree in counseling. He has maintained relationships with classes of students decades later. In 1979, John founded Harkins, the Florist of Louisiana. Initially, it was a one-man operation in his Irish Channel apartment, followed by five years at the intersection of Magazine and Melpomene in the emerging Coliseum Square restoration area. In 1984, the business was moved to its current location at 1601 Magazine Street, also known as the West Indies island building between Felicity Street and Richard Street. In 2018, he sold the business to John Armbruster while staying on as a business consultant. Harkins, the Florist continues to flourish as one of the largest flower shops in the city. He was also a passionate member of Trinity Church, serving as Clerk of the Vestry, a member of the Executive Committee, Lay Eucharistic Minister, Lay Eucharistic Visitor, and Usher. He trained for Stephen Ministry and served on the Leadership Council of that group and brought many new people to the Faith. For many years, he was a member of the Men’s Retreat Group. He especially celebrated Trinity’s spirit of inclusivity. John often referenced his children as his greatest pride and joy, and never missed a single performance or game in which they shined. He was particularly proud to see both graduate from college with honors (from Scripps College and Sewanee: The University of the South, respectively). He happily lived to see his daughter earn a Master of Arts from Columbia University in New York and to watch his son marry the love of his life in October of 2022. A memorial service and reception will be held at Christ Church Cathedral, 2919 St. Charles Ave. New Orleans, La. 70115 at 10:30 AM on Monday, January 23rd. Interment will be private. Flowers are to be provided by the family John cultivated at Harkins, the Florist. All who knew him believe he would appreciate donations made in his honor to Trinity Church. To share your fond thoughts, memories, and condolences with the family, please visit the online guestbook at lakelawnmetairie.com
See more See Less