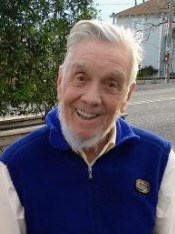 On Saturday July 16, 2022 Lawrence H. Sintes Jr. passed away peacefully at home. Lawrence, a lifelong native of West End and Bucktown, was born December 21, 1934 in New Orleans, the eldest son of Lawrence Sintes Sr. and Eva Rose Kaufman Sintes. Lawrence was preceded in death by his parents, his daughter Pamela Sintes, his sisters Patricia Peirce (Tommy) and Laura Benezue (John), and his brother David Sintes (Judy). He is survived by his loving wife of almost 65 years Geraline (Gerry or Jay) Guilfour Sintes, his son Steve Sintes Sr, grandsons Steve Sintes Jr (Jessica) and Oswald Owens (Shayla), and great-grandchildren Stella Sintes, Jameson Sintes, Jackson Owens, Shira Sintes and Parker Owens. Brother of Eva Rose Paddon (Donald), Edna Desdunes (Wayne), Barbara Estingoy (Ralph). Lawrence graduated from Warren Easton High School and attended LSU in Baton Rouge. He was a member of the Louisiana National Guard Special Forces (paratrooper and Green Beret). Lawrence practiced and taught judo at Crescent City Health Club. Hobbies included chess at the New Orleans Chess Club and sailing on Lake Pontchartrain on Nirvana. He was an early member of New Orleans Yacht Club. He was owner and corporate president of Sintes Boat Works at West End. He created Sea Chest Marine Distributors and Sea Chest Marine Store. For 70 years he was a leader in the boating business community of West End employing and teaching a large alumni of boaters & craftsmen. The family would like to give special thanks to caregivers Cornelia Williams, Edna Richardson, Home Instead, and Xaniera Bates. Family and friends are invited to visitation at Lake Lawn Metairie on Monday August 8, 2022 starting at 11am, service at 1:00pm. Burial will be private. In lieu of flowers, donations can be made to the Pam Sintes Memorial Foundation which benefits victims of domestic violence.
See more See Less