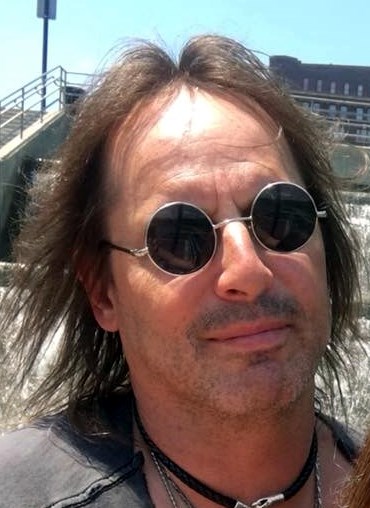 Thomas E. Salzburg, age 54, passed away peacefully at home with his family on May 11, 2020. His life began on August 8th, 1965, in Chicago, as the youngest child born to Therese (nee Miller) and the late John J Salzburg II. His siblings Dolores (Patrick) Gutkoska, Ellen (Dave) Wieczorek, Eileen (the late Fred) Riebel, Ruth (Bob) Griffin and the late John and Mike Salzburg welcomed their new baby brother into a house full of love.

He began a new adventure in life over 35 years ago as a teen when he met his wife Kelly (nee Crane), and knew the minute he met her she was the one he would marry. They embarked on a crazy, wonderful journey, and filled their home and hearts with love as they started their family. Tom was a beloved father to Amber (Will) Rivera, Tommy Jr. and Ashley Salzburg, and a devoted Papa and Best Buddy to William T. Rivera. Tom was a cousin, uncle, great uncle, bandmate, mentor and friend to many. The number of lives he touched is immeasurable.

He was humble, kind, generous and passionate in everything he did. He loved his family fiercely; instilling family values, hard work and unconditional love into his children, while treasuring the quiet moments, adventures and road trips with his wife. Although a (sometimes) stern father, his grandson William broke the mold and melted his heart. He could never keep a stone face when it came to his best buddy.

Tom’s flair for fashion meant you could see him coming from a distance, with his signature round sunglasses, cut-off tee and leather pants. His creativity was an inspiration, and he could make anything out of nothing. Tom loved working on his cars and motorcycles, but his true passion was playing drums. He devoted much of his life to his music, despite his sisters trying to hinder his progress by hiding his drum sticks in the early years. His musical career spanned over 40 years, and his passion and love for performing was unmatched when he stepped on stage. He played every show like it was his last, and made sure he gave the crowd a show worth seeing, a fact underscored by his most recent project when he transformed himself into Alice Cooper and brought the stage to life. He was the first to arrive and the last to leave shows – often helping bandmates and sound guys load out as well.

However, Tom’s passion and fearlessness did not stop at the stage. He lived his life ready for every new exciting adventure. He loved the thrill of speed in his beloved Roadrunner, and the open roads and the wind in his face on his Harley. Motorcycle trips, band road trips, vacations, family gatherings and back yard parties were full of fun, laughter and typical Tom antics. If you were blessed to be a friend of Tom’s, he loved you like family. There was nothing he wouldn’t do for his friends, his family and often times complete strangers. Tom lived life on his own terms and faced ALS head-on, with a strong spirit and a sense of humor.

Tom was determined to continue to do all the things he loved until the disease robbed his body of the ability to so. Tom’s energy, smile, laughter, hugs, one-liners, and antics will be missed by all. A memorial and celebration of life is being planned for the future.

A fund has been set up for the family. Donations can be made to: Salzburg Strong; BMO Harris Bank, 101 Burr Ridge Parkway, Burr Ridge, IL 60527, Attention: Jason K. Account ending in 5432. In lieu of flowers, donations can be made in Tom’s name to ALS Therapy and Development Institute at www.als.net.

In Memory Of Thomas E. Salzburg