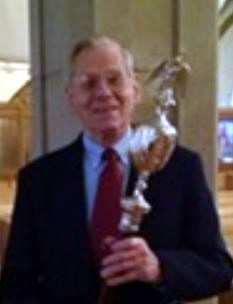 Arthur C. (Art) Hastings, 95, of Ogdensburg passed away at home on August 2, in the company of family, following a brief illness. He joins in eternal life his beloved wife, Harriett, who predeceased him in 2017. A lifelong resident of Ogdensburg and summer resident on Indian Lake in Owls Head, Art was a well-known and highly respected member of the community. Following graduation from Ogdensburg Free Academy in 1945 he enlisted in the Army, serving for two years primarily in post-World War II Germany. Upon his honorable discharge he began an apprenticeship as a watchmaker under the tutelage of Ralph Hulett at the Hulett & Son Jewelry store, then located on Ford Street and later moving to the Seaway Mall on Canton Street. It was while at this latter location that Art would purchase the store in 1983 and continue to operate the store under the Hulett name for many years. Although he later sold it, he continued to work at the store until his retirement in 2009 at the “young” age of 82. While most came to know him as a master watchmaker and jeweler who excelled in craftsmanship and customer service, many others also knew him as a valued, trusted, and dedicated supporter of the community. A long-time member of the Kiwanis Club, Arthur served on numerous boards including the Ogdensburg City Schools; Remington Museum; North Country Library System; Ogdensburg Cemetery; Salvation Army; and United Helpers. He also was a committed supporter of the Ogdensburg Girl Scouts spending many hours each camping season to ensure that the scouts had a safe and memorable experience. It was for his dedicated service that he would be presented with a life membership by the Girl Scouts. Very special to Art were his decades of devoted service to St. John’s Episcopal Church where he held numerous positions including as a member of the Vestry and warden, treasurer, superintendent of the Sunday school and chair of the building and grounds committee, among others. Seldom missing a Sunday service while in town, Arthur was a mainstay in Bible study sessions. He was a maestro at repairing clocks and it was not uncommon for him to bring several home while they were under his care just so he could hear and observe whether the repairs he was making were producing the correct result. Even in retirement former patrons would often seek his help in fixing a wayward clock or watch. His craftsmanship, however, was not limited to jewelry or timepieces. His hobby was woodworking, a skill he learned early on working with his father. Many of his finely fashioned, functional pieces adorned his house or over the years found places in the homes of family members and close friends. Other items were custom made for certain purposes such as a bookcase, dining room table and china cabinet for the family camp in Owls Head. Along with creating stained glass pieces of his own design, he found much pleasure and relaxation in these endeavors. In addition to his wife and parents, Dr. Charles and Eunice Landry Hastings, Arthur was predeceased by brothers Charles, Robert, and Donald. He is survived by a sister, Mary Hastings of Syracuse, NY and daughters Dr. Susan-Hastings-Bishop (Glen) of Gaylord, MI; Nancy Stewart (Bill) of North Greenbush, NY; and Mary Hastings (Anma Ingeana) of Madison, WI. He is further survived by granddaughters Jennifer Stewart Goldstein (David) of Westford, MA; Kate Stewart Stewzik (Joe) of Collingswood, NJ; Ann Bishop (Sid) of Goleta, CA; and great grandchildren Emma and Jonathan Goldstein. Also surviving are numerous loving nieces and nephews. The family offers their special thanks to relatives, friends and neighbors who have been so supportive of Art over the years, and especially during his last days, including Shirley and Mike Miller; Rev. Carolyn Bartkus; Rev. Michael O’Donnell; Dr. Manuel Palao; Michele and Jim Morrison; and the earthly angels from Hospice, Candace and Theresa, who provided gentle care to Art and support to his family. A funeral mass will be held at 11am on Thursday, August 25 at St. John’s Episcopal Church, 500 Caroline St., Ogdensburg. Calling hours will precede the mass from 9-11. According to Art’s and Harriett’s wishes, their ashes will be interred together at the convenience of the family in the Morningside Cemetery in Malone, NY.
See more See Less

In Memory Of Arthur Hastings