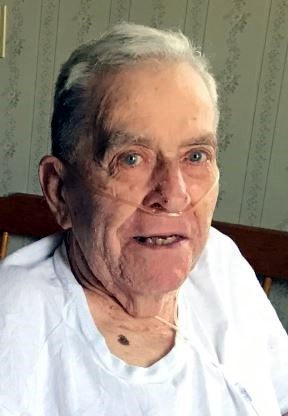 Victor C. Childs, age 94 of Clinton Street in Heuvelton passed away on Sept 14, 2022 at the Canton Potsdam Hospital surrounded by his family. A private family service will be held at the Heuvelton Wesleyan Church on Saturday for his family. Burial will follow at the Hillcrest Cemetery in Heuvelton. Surviving are three daughters Dawn (Jerry) Crossett of Lisbon, Donna Childs & her companion Paul Langtry of Heuvelton; Lori (Kirk) Crossett of Ogdensburg; three grandchildren Brett & his wife Nichole, Kendra & Andrew Crossett; two great-grandchildren and several nieces, nephews & cousins. He was predeceased by his wife Helen on Dec 31, 2020; a daughter Diane Childs age 7; a ½ brother John Mayne; and a ½ sister Murial “Eloise” Russell. Victor was born on May 13, 1928 in Ogdensburg, a son of the late John & Floy (Sypes) Childs. He attended country schools and graduated from Heuvelton Central. He was married to Helen Curry on May 9, 1958. His career began as a farmer and then he became employed by Gesner & MacRorie (later called Browns Dairy) where he was a delivery driver until 1980. He then became employed at Canton ATC in the Janitorial Department until he retired in 1991. Victor enjoyed gardening, visiting Old Orchard Beach in Maine in the summer, coin collecting, watching Yankee Baseball and spending time with his family. Memorial contributions can be made to St. Joseph’s Home, 950 Linden Street, Ogdensburg, NY 13669. Condolences and fond memories can also be shared online at www.foxandmurrayfuneralhome.com.
See more See Less

In Memory Of Victor C. Childs