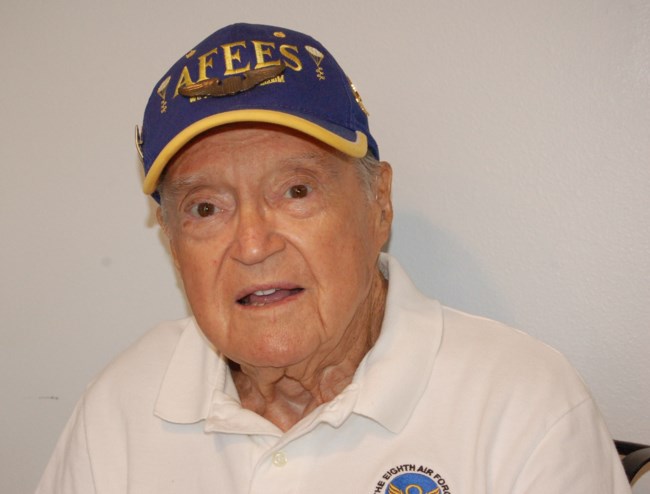 George W. Starks of Winter Springs passed away peacefully Sunday, July 29th. Born in Mayo, FL, he grew up in and around Orlando and Live Oak, FL. After graduating from Suwanee High School, he enlisted in the Army Air Corps and was trained as a B-17 pilot. He was shot down over France and walked 300 miles to escape to Switzerland. After the war, he attended college at the University of Florida and then Dental School at the University of Louisville. In 1955 he moved his family to Orlando where he practiced Pedodontics for 29 years. He then taught at the UF Dental School for sixteen years and then worked for the Board of Dental Examiners for six years, finally retiring completely at the age of 90. His devotion and service to the Professional Practice of Dentistry made him an icon in the field. He was a member of Alpha Tau Omega Fraternity, St. Alban’s Anglican Cathedral, the Central Florida Dental Society, a Board member of the Mighty Eighth Air Force Museum in Savannah, a Fellow of the American College of Dentists, as well as many other professional organizations where he served on the Boards and as President. Also, a member of North Orlando Kiwanis, the Air Force Escape and Evasion Society, the Sons of Confederate Veterans, and Korean War Veterans. A recipient of many awards for service to his country, profession and community, he was most proud of being a member of the French Legion of Honor for his service to the country of France in WWII, and his award from the Govt. of South Korea for his service during the Korean conflict. He held both a Purple Heart and Bronze Star for his service in combat operations. We chided him for probably being the world’s oldest living Gator Fan. He truly bled orange and blue. He was an avid hunter and fisherman and travelled the world in the pursuit of both. He is preceded to his reward by his wife of 65 years, Betty Jo Baechle and his second wife of three years Sue Ryerson. He is survived by his children Jo Marshall, Fern Park; Paul (Betty); Mike (Kathy), both of Winter Springs, Sara (Bill) of Casselberry; step children Scott (Felicia) Winter Springs; Jim (Darcy) Catawba SC, Nancy (Marcus) Longwood and numerous grandchildren, step grandchildren and great grandchildren. Funeral services will be held at St. Alban’s Anglican Cathedral on Saturday, Aug. 11th at 11 am. In lieu of flowers the family suggests donations be made to following of your choice: St. Alban’s Cathedral 3348 W. SR 426 Oviedo, FL 32765 in memory of George Starks UCF Foundation, Inc. 12424 Research Parkway, Suite 250 Orlando, FL 32826 in memory of George Starks, Aphasia House Raymond Meyers Memorial Scholarship Fund University of Louisville School of Dentistry 501 South Preston Street, Room 240C Louisville, KY 40202 in memory of George Starks
See more See Less