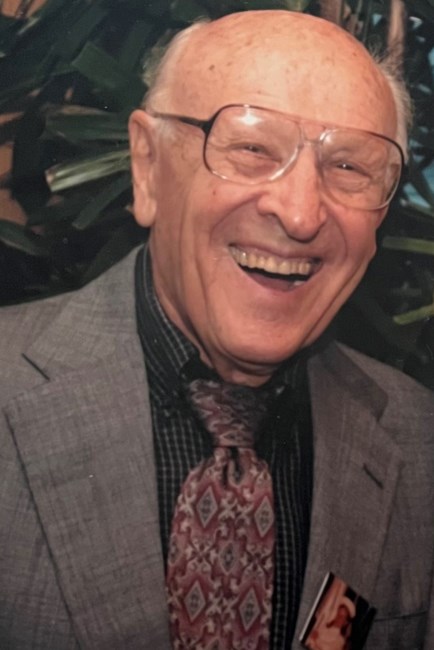 IJ Morris at Star of David Cemetery of the Palm Beaches

George Herman, 99, of Jupiter, Florida passed away on Monday, January 16, 2023. He is survived by his 5 children; Ross (Karen) Herman, Scott (Sheryl) Herman, Merryll (Jonathan) Abrahams, Dean Herman, and Lyle (Ying) Herman; His seven grandchildren; Tova, Max, Laura, Simcha Lev, Natalie, Lucien, and Leif; along with four great grandchildren; Sylvie, Rex, Olive, and Arlo. George is preceded in death by his wife Lyn Herman and his parents Jacob and Bella Herman. Always ready to tell an interesting story, George’s comradery was enjoyed by many. He filled his 99 years with a vast amount of experiences. Born in Chelsea Massachusetts, one of six children, he made family a priority throughout his life, always seeking out relatives. After serving in the Army during WWII, he graduated from the University of Michigan, something he had never imagined attaining during his hardscrabble youth. He began his career as a Design Engineer with Pratt & Whitney in 1955 in Connecticut. When George was approaching retirement, he accepted a corporate relocation offer and moved to Jupiter, Florida. Upon retiring he continued to stay active by tutoring math at a local school, organizing art appreciation sessions at his condominium, volunteering at his synagogue where he was honored as “Man of the Year” in 2007, annually traveling internationally, attending book club meetings, and playing tennis until he was 90. George continually said what he was most proud of was his wife and five children. His 70 year marriage to the love of his life, Lyn, was filled with romance and adventure. It was a treat to join him on one of his walks along the beach or in a park and listen to his thoughts and experiences. A funeral service will occur Thursday, January 19, 2023 from 10:00 AM to 11:00 AM at IJ Morris at Star of David of the Palm Beaches, 9321 Memorial Park Road, Palm Beach Gardens, FL 33412. A committal service will follow. Contributions in Joseph's memory may be made to American Cancer Society, https://donate3.cancer.org/; Alzheimer's Research and Prevention Association, https://act.alz.org/; and Temple Beth EL, bethelwpb.com. Fond memories and expressions of sympathy may be shared at www.starofdavidfunerals.com for the Herman family.
See more See Less

In Memory Of Joseph Herman