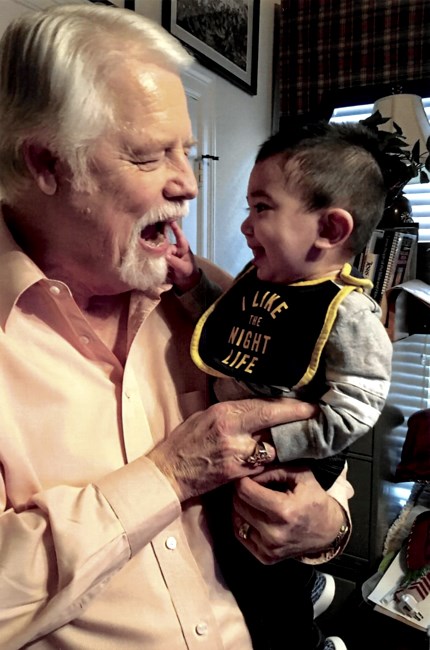 JB Carter, known to some as Coach Carter, Mr. Carter, colleague, friend, and mentor. To his family he was the patriarch with titles of Husband, Dad, Father-in-law, and Grandpa. JB was called to Heaven on Saturday, May 25, 2019. With his close friends and family by his side, he entered the glorious Kingdom of God. JB was born October 8, 1946 in Montrose, CO. His parents Cleve and Helen Marchbanks settled in Amarillo, TX when JB was a little boy. Amarillo quickly became their hometown. He graduated from Palo Duro High School in 1965 and continued his education at Amarillo College and West Texas A&M. JB graduated with a Bachelor of Science Degree in Mathematics Education with Minor Degrees in Secondary Education and Physical Education. JB was an active member of Lambda Chi Alpha fraternity throughout his college career. After moving to the Houston area, JB completed his Master of Science Degree in Educational Management from the University of Houston Clear Lake. JB knew early in life that his passion was teaching and coaching. In his early career, he worked for multiple school districts including: Amarillo, River Road, Silverton, Frenship, Atlanta, and Pasadena ISD. While coaching at Frenship, JB was the first coach to lead the Basketball team to the District 5-2A championship, Bi-District Championship, and Regional Finals. JB settled at Deer Park ISD where he held various positions including truancy officer, assistant principal at Deepwater Junior High, and eventually decided to return to the classroom teaching high school math. After 27 years of service JB retired from Deer Park ISD in 2005. He could not stay retired and quickly found himself working as an adjunct professor at San Jacinto College Central Campus. Four years ago, JB was given an opportunity to join the staff of First Baptist Christian Academy teaching geometry. JB loved teaching at First Baptist Christian Academy and was greatly honored to be part of the staff at the school. Throughout his working life, JB also taught driver’s education. JB married his soul-mate and best friend, Sandy, on June 15, 1979. For the last 39 years she has been the love of his life leaving 3 weeks shy of their 40th wedding anniversary. In retirement, they traveled to places including Norway, Denmark, England, France, Israel, Mexico, the Bahamas, the British Virgin Islands, the Cayman Islands, and the US Virgin Islands. They also loved going to Houston Texans football games to support the hometown team. They were active members of South Main Baptist Church in Pasadena. Two years ago, JB’s pride and joy was born, Grayson Carter. Grandpa and Grayson shared a special bond from birth. JB spent hours walking and bouncing his “little man.” Grayson stayed with his grandparents during the first summer of his life. Grayson always wanted his Grandpa to go feed the fish with him, or make him popcorn. JB is survived by his wife Sandy Carter; son Brian (Jill) Carter; grandson Grayson; brother in law Scott (Patty) Mauger; aunts Dorothy Rule, Velva Jo (Daryl) Bond; uncle Leonard (Donna) Marchbanks; favorite cousin Kathy (Howard) McWilliams.
See more See Less

In Memory Of J B Carter