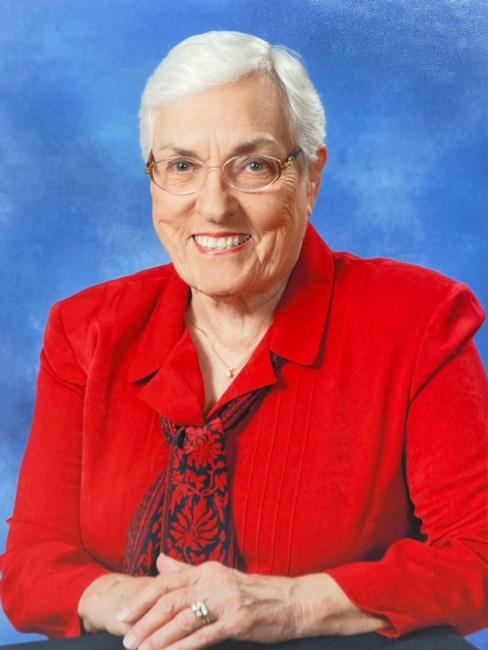 Peggy Loretta Shepherd Flint February 24, 1932 – May 3, 2022 Peggy Loretta Shepherd Flint, of Deer Park, Texas, passed away on May 3, 2022 at the age of 90. Peggy was born February 24, 1932 in Weleetka, Oklahoma, to Jeff and Mary Shepherd. She spent her childhood years in New London, Texas where she graduated from London High School in 1950. This is where Peggy met her future husband, Charles “Chick” Flint. Following high school, Peggy attended Kilgore Junior College, then moved to Houston to attend the Lillie Jolly School of Nursing where she was valedictorian of her graduating class and voted Best All-Around Student by her classmates. While in nursing school, Peggy sang in the BSU state choir as well as a ladies trio. The trio was invited to sing at a Texas Baptist Convention where Evangelist Billy Graham was preaching. Peggy continued her education in later years by earning her Bachelor of Science degree in Psychology and a Master of Arts degree in Health Education from the University of Houston. Peggy began her career in nursing as an operating room nurse, then in 1961 she accepted a position as school nurse with Deer Park ISD, working at Deer Park Junior High for most of her 27 years in the district before her retirement. Peggy married the love of her life on October 10, 1954 in a small ceremony at the London Baptist Church while Chick was home for a weekend leave from the Army. They lived in El Paso until his Army discharge, then moved to Dallas for three years before settling in Deer Park Texas in 1959 where they raised their 3 daughters. Peggy’s greatest enjoyment was in spending time with her family, whether it be big family vacations or gathering together for a family meal and game night. Peggy enjoyed reading, traveling and was a great fan of the Houston Astros. A devout Christian and faithful prayer warrior, Peggy was a member of Deer Park First Baptist Church for 63 years, Peggy was a longtime member of the choir and enjoyed singing in the ladies ensemble, Adoration. A faithful worker in the Children’s Sunday School department, she also volunteered her time working with the church Bereavement team and was a member of the Building Committee which helped design and oversee the completion of the current worship center. Peggy was preceded in death by her husband of 64 years, Charles “Chick” Flint, her parents Jeff and Mary Shepherd, and beloved sisters, Jean Turner, Kay Allen and infant sister Frankie Shepherd. Peggy is survived by daughters Nancy Cathey and husband David, Julia Golden, Amy Peters and husband Mike; grandchildren Alana Munoz and husband Greg, Michael Golden and wife Brittany, Travis Pennington and wife Julie, Felicia Golden, Liana Golden, Justin Peters, Melissa Caylor and husband Justin. In lieu of flowers, donations may be made to the Deer Park First Baptist Church Bereavement Fund. A graveside service for Peggy will be held Monday, May 9, 2022 from 9:00 AM to 10:00 AM at Grand View Funeral Home, 8501 Spencer Highway, Pasadena, TX 77505. Following the graveside service will be a memorial service from 11:00 AM to 12:00 PM at First Baptist Church Deer Park, 438 E. Eighth St, Deer Park, TX 77536. Fond memories and expressions of sympathy may be shared at www.grandviewfunerals.com for the Flint family.
See more See Less

In Memory Of Peggy L. Flint