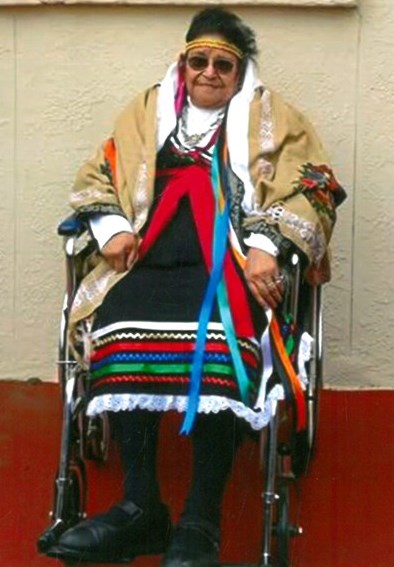 Manuela (Nellie) is survived by her loving children, daughter Gloria H. Bustillos (Wife: Guadalupe Gonzalez), son Frank H. Bustillos Jr. (Wife: Rosie B. Bustillos). Grand-daughter Devonne Bustamante, Grandsons: Frank A. Bustillos, Alexis R. Bustillos Osuna, Jesus J. Bustillos, Estevan M. Bustillos, and preceded in death by her eldest son ( David H. Bustillos) and husband (Francisco F. Bustillos). Manuela (Nellie) is also survived by her half-siblings: Maria D. Herrera, Maria M. Herrera, Juanita Herrera, Stepbrother; Ernesto Herrera. Preceded in death by her father; Manuel Gutierrez Herrera, Mother; Ysidra Luevano Martinez, Sister’s; Julie Herrera Padilla, Jesusita Herrera, Cruzita Herrera, Rosie Herrera Aguilar, Half-brother; Francisco M. Herrera, Stepsister; Margarita Herrera. Manuela (Nellie) has numerous nephews, nieces, cousins, Godchildren, and in-laws from: Metro-Phoenix, Arizona; El Paso, Texas; Muleshoe, Texas; Cleburne, Texas; McAllen, Texas; Las Cruces, New Mexico; Salt Lake City, Utah; West Jordan, Utah; Colorado; Norwalk, California; Diamond Bar, California; Riverside, California; Temecula, California; San Diego, California. Manuela (Nellie) was born in Las Cruces, New Mexico. She lived with her parents until she married her late husband Francisco F. Bustillos. They lived in the small-town of La Mesa, New Mexico, while Manuela worked for the small town of Las Cruces. They later moved to Phoenix, Arizona where they raised their three children. Manuela worked 30 plus years, for Motorola where she had many co-worker friends. She worked in various positions and retired as a supervisor. Manuela (Nellie) enjoyed watching sports on the television and in person. She liked watching NFL football games and she rooted for her favorite team, the Arizona Cardinals. She also enjoyed watching and rooting for the Arizona Diamondbacks. She especially loved watching them when they defeated the New York Yankees in the World Series. True to form just like her husband, Manuela’s favorite saying was “We never lost a World Series to the New York Yankees.” Her favorite and most loved sport and team to watch was the Phoenix Suns basketball team. Her favorite player is “Devin Booker.” Manuela (Nellie) touched many lives during her lifetime. To many she was a mother figure, an aunt, and a confidant; but ultimately, she was a friend to all and was proud to say that she had many great friendships. She enjoyed camping and fishing in Payson, Arizona. She loved traveling and visiting relatives in New Mexico, Texas, and California. One of her hobbies was to go shopping and playing the slots at the Casino. Manuela (Nellie) was also a very devout Catholic and registered member of the Holy Family Parish and St. Edwards the Confessor Church. She always looked forward to attending church service and socializing with other church members. She prayed the Divine Mercy and the Rosary, daily. She was very proud of her Catholic faith. Manuela (Nellie) looked forward to traveling every year to Las Cruces, New Mexico in particular the Tortugas Pueblo to celebrate “El Día de La Virgen de Guadalupe” ceremony in December. She was accompanied by her late husband, her deceased son, her daughter and her youngest son and family. Manuela is of “Piro-Manso-Tiwa and Mescalero Apache” tribe descent, she was a member of “La Corporacion de Los Indigenes de Nuestra Senora De Guadalupe.” Manuela (Nellie) will be dearly missed by her children, her grandchildren, as well as her siblings, cousins, in-laws, nieces, nephews, and her stepsiblings. She is now with God in heaven and watching over everyone. Rest in Peace Manuela “Nellie” Herrera Bustillos. (Mother and Nana)
See more See Less

In Memory Of Manuela Herrera Bustillos