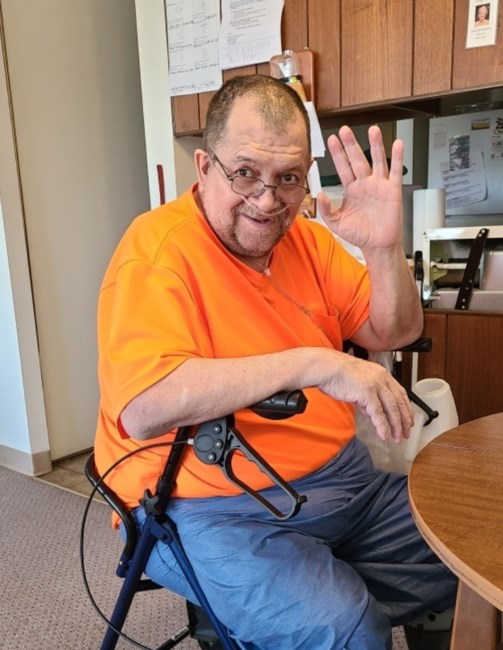 Matthew Albert Devoe, 63 of Saco, passed away at Maine Medical Center on Sunday, May 1, 2022, from chronic pulmonary disease. Also known as Matt, Matty, Matty D, (his brothers affectionately called him Lunkhead), Matt put up a valiant fight the last four months, and we are so proud of his determination. He was the third child for Gary Devoe Sr.and Elizabeth (Betty) Devoe, and was born premature in the back of a Portland Police Department station wagon on the way to Mercy Hospital in Portland on March 5, 1959. Matt was as usual impatient, and came out in mom’s seventh month of pregnancy weighing a little over 2 pounds. He came into this world a fighter and left this world a fighter. Matt was always a social butterfly. Whenever we moved to a new apartment as kids, there was always no sign of Matt helping us to carry boxes. When he did show back up, he would have a new friend that he would introduce to our mother, “Mom, I want you to meet my new best friend. Hey kid, what’s your name?” Matt was the family ambassador. Growing up in the Deering sections of Portland, Matt attended St Joseph’s Parish School on Stevens Ave and graduated from Cheverus High School in 1978. He was supposed to be in the class of 1977, but due to hip surgery, Matt had to repeat a year. He played Tidbit football in Portland where he met his friend Mike Hildebrand and family. Mike’s dad Gerry coached the team and took a shine to Matt. He also played Tidbit football for the Jets, who won the football championship under the coaching skills of Joe Rich. Matt loved sports and was a huge athletic supporter (you can interpret that either way). Matt got a job while in high school at the Cumberland County Civic Center and enjoyed his career there as a security event staff for well over 30 years. He loved the CCCC and could be seen in section GG for most of the hockey games. Matt’s work career included Yellow Submarine Pizza and Sandwiches, Lou’s Corner, Oliver Vending, Taylor Made Security, Eagle Snacks, Michaud Distributors, Lepage Bakeries and the Saco School Department as a school bus driver up until he experienced career-ending medical issues. Matt enjoyed playing chess, poker, and cribbage and was great at playing all of them. Matt is survived by his father, Gary Devoe Sr of Portland; Brother Gary Devoe Jr , his wife Heidi Osborn of Gorham, and their two daughters Anna and Kelly Devoe; Brother William (Bill) Devoe, his wife Janet Devoe; of Cumberland; Sister Stacey Hagerman, her two children Todd Hagerman Jr and Liz Hagerman and granddaughter Aaliyah Hagerman; Brother Albert Devoe of Old Orchard Beach and his daughter Laura Devoe. Matt also is survived by two very close friends he considered brothers, Dwayne Welch and Mike Bell. Matt was predeceased by his mom Elizabeth (Betty) Devoe, sister Stephanie Devoe, nephew Christopher Devoe, and numerous other family members and friends. Matt is being cremated and wanted no service. However, a celebration of his life will be planned, and Matt’s request was to have a party and have people raise a glass to him. As soon as we have the details, we will post it. We hope you all can attend and make his wishes come true. The family wishes to thank the staff at Maine Medical Center who took great care of Matt and showed him a lot of respect. They also had to endure Matt’s endless flirting.
See more See Less

In Memory Of Matthew Albert Devoe