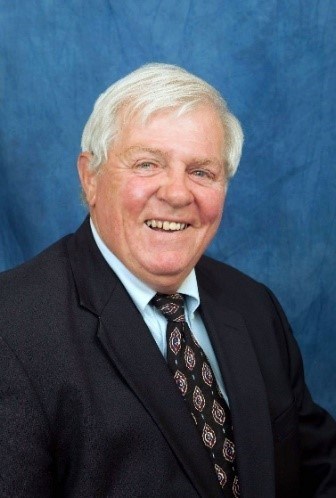 South Paris, ME - Michael Stephen Denning, 77, passed away peacefully on Saturday, September 17, 2022 at Market Square Health Center in South Paris, Maine. Born in 1945 in Bradford, Pennsylvania as one of six children of Lois and Francis “Rock” Denning, Mike attended Bradford Area Schools. There, he fell in love with the game of basketball and was also a football standout, playing for the “Rock” alongside his brother Charlie. In 1959, the three Denning’s led the Bradford Owls football team to a memorable undefeated season. Mike then went on to Hobart College in Geneva, New York where he played basketball, football and lacrosse, but he was perhaps the proudest of his “Faculty Squash Champion” trophy which remains at the College today. He was awarded an MBA with a concentration in Finance from the Wharton School of Business in 1969. Typical of Mike, he would often reflect that his favorite job during those years was as a garbage man during the summers, because “you were done at noon and could hit the beach.” As a young banker with a zest for living, Mike and his former spouse lived in New York, Philadelphia, Houston and London. With the addition of a baby daughter and then son, they moved to Maine to pursue a different pace of life, ultimately settling in Yarmouth for the better part of 40 years. As a younger man, he loved nothing better (aside from family) than rising at 5 a.m. for a vigorous run. Neither rain, nor sleet, nor snow would interrupt those runs. This routine was gradually replaced by holding court at the local coffee shop at 6 a.m. or “working out” at the Casco Bay YMCA, regaling his friends and curious onlookers with his take on sports, politics, history, or the general state of the world. Whether you asked for it or not, the “Mayor”, “Mikey”, ”Big Bear”, or “Coach” (depending on who you asked) always had some good counsel for you. He loved his family fiercely and also his community with the “Sunday old man ball” that became a weekly ritual for the gang. A fixture on the Maine high school and small college sports scene, he loved healthy competition, helping young people, and seeing others succeed. Michael S. Denning is survived by his sons of which he was so very proud; Jordan, Seth (Kristine) and Lucas; his former spouse , Marina Denning; his beloved sister, Mary Ann Fisher of Fort Worth, Texas; his brother, John (Karen) Denning of West Milford, New Jersey; his grandchildren Laila, Nathan, Gavin, and Campbell; numerous nieces, nephews and grand-nieces and nephews; and his best friend and “wingman”, Robert Avaunt. He was preceded in death by brothers, Charles and Joseph, sister, Martha Krugman, and the apple of his eye, his daughter Hanley, the founder of Safe Passage. We miss you terribly already Mike. Let’s hope they play ball in Heaven. A Celebration of Life will be held at the Hanley Denning Memorial Bench at Yarmouth High School on October 15, 2022 at ten o'clock. In lieu of flowers, please donate to Safe Passage: https://www.safepassage.org/donate/. Additionally, the Denning family would like to express their gratitude for the care and compassion from the staff at Market Square Health Center.
See more See Less

In Memory Of Michael Stephen Denning