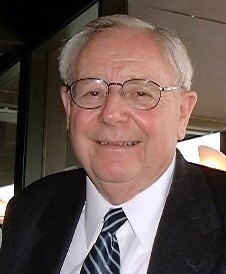 John (Buz) Walker III was born in Portland, Oregon on October 18, 1932 to Freda Egger Walker and John Walker (John Jr.). He was a second generation Portlander and Oregonian. He died peacefully at his "455" Portland home on July 15, 2020. He was a beloved husband, father, grandfather and friend. His early years were spent on northeast Columbia Boulevard surrounded by many aunts, uncles, and cousins. His parents were in the dairy business with his mother’s Egger family. In 1948 his father, a German immigrant from the Volga River region in Russia, would enter the garbage hauling business and found what would later become Walker Garbage and Recycling, Inc. Many early garbage haulers in Portland were “Volga Germans”. Buz very much enjoyed sharing stories of his childhood with his children. He remembered being unable to reach his parents at the onset of the Vanport Flood in 1948. At 16 years old, Buz drove a garbage truck to the scene to aid in the evacuation. Saving cows standing on the greens of Broadmoor Golf Course and rowing a boat through the streets of NE Portland with his friends and cousins were among his often recalled memories. Buz graduated from Jefferson High School in 1951. He attended Oregon State University and joined Kappa Sigma fraternity, beginning the legacy of Walkers attending OSU, Greek affiliation, and avid Beaver sports fandom. All the Walker kids and their friends spent many happy game days with Buz at his football tailgate. He would never leave a game before it was over, supporting the Beavers through and through, and setting that expectation for family and friends. He married Patricia Ann Pillman on September 25, 1954. After serving in the US Army, Buz assumed ownership of Walker Garbage Service in 1960. Pat was his business partner in the company that was started by his father, a pillar in Cedar Mill since 1948. Later sons Jeff and Greg joined him in operating the company, and they still do today. Buz took great pride in knowing his customers and providing service above and beyond what was expected. Buz rarely missed his children’s and grandchildren’s ball games, dance recitals or school activities. He took pride in providing a place for his children and grandchildren to revel in being cousins; spending time together making lifelong memories at their Portland home and their home in Seaside, Oregon. Together he and Pat raised five children and were married for 49 years until her death in 2003. Buz married high school friend Gloria Shaw in October of 2005. They enjoyed many cherished adventures traveling, dancing, and golfing. Buz taught his family the importance of hard work, having a lot of fun along the way, and the importance of lifelong friends. Many of his children’s friends would count him as one of theirs, and the feeling was mutual. He is survived by his wife Gloria, sons Jeff (Lisa), Steve (Lori), and Greg (Jennifer); daughters Kari and Melissa (Christopher); grandchildren Brett (Katie), Ben, Amy (Seth), Jon, Rachel (Caleb), Ashleigh, Madeline (Nick), Matthew, Mary, Blake, and Trevor; great grandchildren Tanner, Elanor, Jillian, Annika, Graham, Rory, and Finn. A visitation and viewing is scheduled for Wednesday, July 29 12:30 - 2:30 p.m. Covid regulations will apply. Skyline Memorial Garden. A private graveside service will follow. In lieu of flowers, the family suggests donations to Serenity Hospice Music Program 11481 SW Hall Blvd, Suite 200 Tigard, OR 97223. Visit https://www.dignitymemorial.com/obituaries/portland-or/john-walker-9262864 to view photos and leave a memory or condolence.
See more See Less