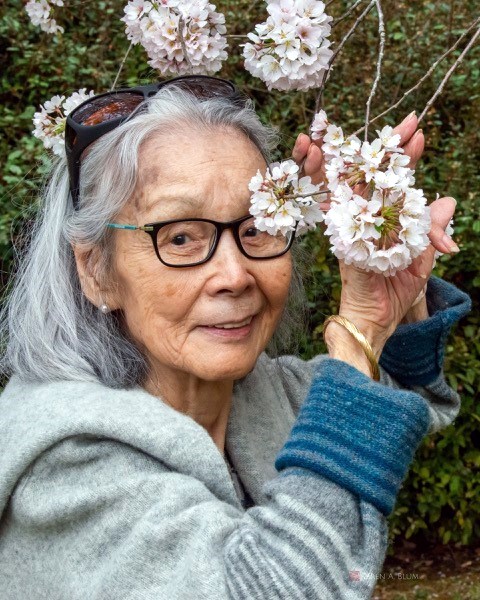 Mari Morita Blum of Cary, passed away peacefully in the early morning of Tuesday, October 5. She was 91 years old.

Native to Kyoto, Japan, Mari was born on February 26, 1930 and raised by her loving parents, Kichimatsu and Tomi Morita. Mari started college at Doshisha University before finishing a degree in fashion college. She went on to have a successful modeling career in Tokyo and Osaka, including for European fashion designers such as Christian Dior. Mari met the love of her life, Robert Blum, while he was stationed at a Marine Corps Air Base in Iwakuni.

After a year of badgering from Bob, she finally followed him to the United States in December 1964. They had two children, David and Karen.

Mari became a United States citizen on October 4, 1996 so she could vote against people she did not like. She voted in every election after becoming a citizen.

Mari loved to spend time with her grandson, Silas. She also enjoyed traveling to Kyoto to visit her daughter, Mayumi, son-in-law, Nobu, granddaughter, Hitomi, and great grandson, Shunsuke. She was beloved to so many people. Everyone who met her was touched by her warm smile and genuine interest and care for others. She was special in so many ways.

A burial service will be held at 10:00 am on Wednesday, October 6, at the Jewish Hebrew Cemetery in Raleigh. The family will receive friends and sit Shiva after the service, at the home of Dave and Crystal Blum, at 5604 Millrace Tr. in Raleigh, culminating in a prayer service at 7:30 pm. The family requests that anyone wishing to make a donation do so to Beth Meyer Synagogue in Raleigh, NC, or Toys for Tots.

Fond memories and expressions of sympathy may be shared at www.brownwynneeastmillbrook.com for the Blum family.

In Memory Of Mari Morita Blum