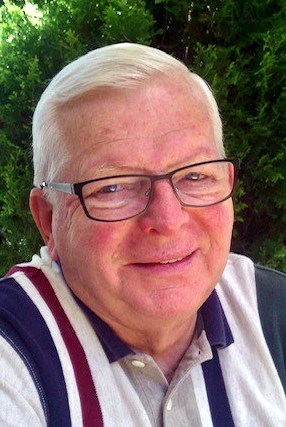 WILLIAM “BILL” ALLAN HAMMOND, Jr., age 84, of Rochester, passed away on Tuesday, January 18, 2022. Beloved husband of Patricia Jean Hammond, who preceded him in death in 2018 following 56 years of marriage; loving father of William Hammond Jr. (Anne), Diane (Kevin) Bengtson, and Susan (Kirk) Conley; caring grandfather of 9: William, John, and Cora Hammond, Aaron Bengtson-Coria, Megan Andros, Sean, Jason, Angela and Caitlin Conley; dear brother of Carol (Dave) Parker. In addition to his parents and wife Patti, Bill was preceded in death by his sister Patricia (Tom) Bishop. Bill was born on February 20, 1937 in Baltimore, Maryland, son of the late William and Helen (Peterson) Hammond. He grew up in the Flint, Michigan area, graduated from Flint Central High School and then attended General Motors Institute of Technology (Kettering University) and graduated as an Engineer. He then began his career with General Motors where he worked until his retirement in 1997. Bill also served in the U.S. Army reserve from 1960 to 1966. On May 26, 1962, Bill married Patricia “Patti” Jean Lauckner at Redeemer Lutheran Church in Flint, Michigan. They raised their family first in Grand Blanc and then moved to Rochester. He was a longtime time member of St. John Lutheran Church in Rochester, and had been involved for many years as the Superintendent of Sunday School as well as a leader of one of the counting teams following church services. He was a member of the American Legion and loved Lionel Trains, becoming a collector and hobbyist. Following retirement, he and Patti would spend winters at their home in Spring Hill, Florida. A Memorial Service will be announced at a later date and will be held at St. John Lutheran Church. Memorial contributions may be made in William’s memory to St. John Lutheran Church Love for Others Fund. Please write in “Love for Others Fund” in the comment line and on the envelope.
See more See Less