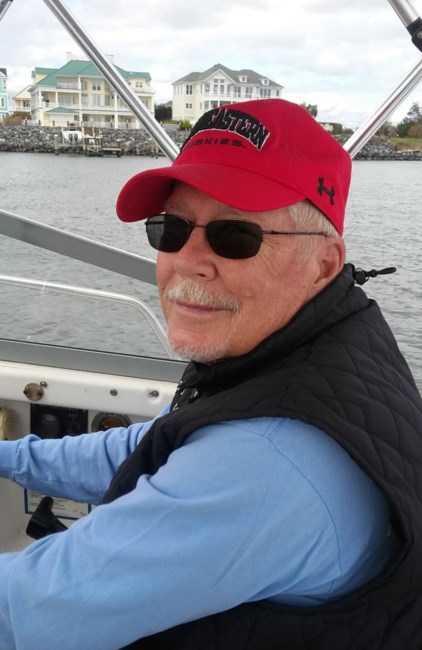 Frederick Burch Weiss, 78, of Ocean Pines passed away Saturday, July 16, 2022, at Atlantic General Hospital. Born August 5, 1943, he was the son of the late Frederick Adolph and Jane Collinson Weiss. He is survived by his wife of 58 years, Alta Ann Weiss; two daughters, Lisa Ann Weiss and Elizabeth Jane Koutsoumbaris; sons-in law, John William Strand and T. Alex Koutsoumbaris; grandchildren Pearl Elizabeth and Lucy Constance Strand; and Benjamin Stamatios Koutsoumbaris and Joshua Frederick Koutsoumbaris. He was preceded in death by his two sisters, Flora Jane Moore and Florence Cole Jeziorski. Growing up, Fred spent his winters in his parents’ Baltimore home and summers at their waterfront home on the Severn River. He bought his own boat at age 12 and had a boat ever since. He was an excellent water skier and also enjoyed fishing or just cruising around with family and friends. Fred was an athlete throughout his elementary, high school and college years. He played football, lacrosse, and soccer and received numerous trophies and awards. In 1958, Fred began his sophomore year at Severn School in Annapolis, MD, as a boarding student. That year he played JV football and was one of three sophomores who played varsity lacrosse. During his junior and senior years, he played varsity football almost every minute of every game and played first midfield varsity lacrosse. In his senior year Fred received multiple awards in football and was co-captain of the football team and Varsity Club president. He was inducted into the Severn School Athletic Hall of Fame. Fred graduated from Washington College in Chestertown, MD, in 1965 and became a member of Kappa Alpha fraternity in his freshman year. During college, he continued to play first midfield varsity lacrosse as well as played varsity soccer. He was named an All American lacrosse player and lettered all four years in lacrosse and soccer. He was inducted into the Washington College Athletic Hall of Fame. Fred married his college sweetheart, Alta, the love of his life, and he kissed and told her so almost every day. Fred and Alta bought their Ocean Pines lot in May 1969 and had their house built in 1971. Among the first persons to live permanently in Ocean Pines, theirs was the second (almost first) house on Sandyhook Road, which was still a dirt road when they moved into their house. During the early years of Ocean Pines Fred enjoyed riding his various motorcycles to explore the new sections of Ocean Pines that were gradually added over the years. Fred was a charter member of the Ocean Pines Volunteer Fire Department, feeling it was his duty to serve the new community that had only a few young year-round owners. When the Ocean Pines Yacht Club and Marina was built, Fred rented a boat slip right away and continued to do so until his death. His family and friends enjoyed water skiing, fishing, and boat rides in the river, bay, and ocean. Fred retired from the Maryland Department of Labor, Licensing, and Regulation (DLLR) in 1993 so he could spend more time being a “snow ski bum” and summer boater. He and Alta were initial members of the Salisbury Ski Club of Delmarva, and were trip leaders for New England ski trips for over 20 years. They also skied most major Northeast ski areas with their children, and Fred skied twice in Europe. Then the western mountains beckoned him, with their fresh, light, powder skiing. Each ski season, Fred with Alta or Fred with some of his ski buddies made many trips to different western ski areas. On one trip, they discovered a smaller, but very challenging local ski area – Sunlight Mountain in Glenwood Springs, Colorado. Fred and Alta bought their first slopeside Brettelberg condo on the mountain in 1985 and continue to own two condos there. They started an annual pattern of driving to Colorado to stay at their condo from December through early April and ski not only Sunlight but also Vail, Beaver Creek, and the Aspen area mountains. Fred was an excellent skier and had different skis for every kind of snow conditions. He was also a highly skilled ski tuner and kept all his family’s and friend’s skis in great condition. At Fred’s request, no formal service is to be held. His wish was to be cremated and have his ashes spread by his family at his chosen places. Visit wwwboundsfuneralhome.com to share stories and memories with the family.
See more See Less

In Memory Of Frederick Burch Weiss