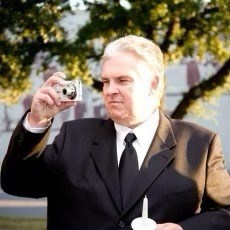 On July 29, 2022, James “Michael” Vaia, was son of James Vaia and the late Barbara Canter, passed away suddenly at his home in Salisbury, Maryland. A 1977 graduate of Northridge High School in Johnstown, Ohio, he continued his education at Ohio State University in Columbus, Ohio majoring in Electrical Engineering, and then on to Cleveland Institute of Electronics in Cleveland, Ohio, majoring in Broadcast Engineering. After college, Michael entered into the broadcasting field where he climbed the professional ladder in television and radio resulting in his relocating to Maryland where he would spend the rest of his life. Besides many television shows to his credit Michael worked for Panasonic Broadcast for 17 years as well as Nielsen (formerly Arbitron) for 15 years. Michael spent many years in the television industry and was still working for Face The Nation as well as freelancing for CBS Evening News with Norah O’Donnell at his passing. He was well loved by his colleagues within the television broadcast industry having worked for NBC, ABC, CBS, PBS, Comcast Sportsnet, TV-One, Veteran’s Affairs, and many other federal & private agency broadcastings in and around Washington, DC. Michael also covered the 1992 Olympics traveling to Barcelona, Spain to which he was very proud. He had many interests including his first hobby started in childhood, Ham Radio, where he attained his; FCC General Radiotelephone License, FCC General Radiotelegraph License, FCC Amateur Radio Extra Class License as well as being a life member of ARRL. Another love of Michael’s was the water where he became a sailing aficionado spanning several decades as well as his most recent passion, bee keeping. Michael is survived by his wife, Tina Bolton, stepson, Christian (Valerie) Bolton, three grandchildren, father, James Lee Vaia, sister, Cheryl Vaia (Herb) Bresler, four nieces, a nephew, Aunt Linda Harmon, and many close cousins whom he loved dearly. He is preceded in death by his mother, Barbara Canter, brother, John Vaia and sister, Annie Cacciato. A celebration of Michael’s life will be held in Licking County, Ohio in 2022; to be announced later date.
See more See Less

In Memory Of James Michael Vaia