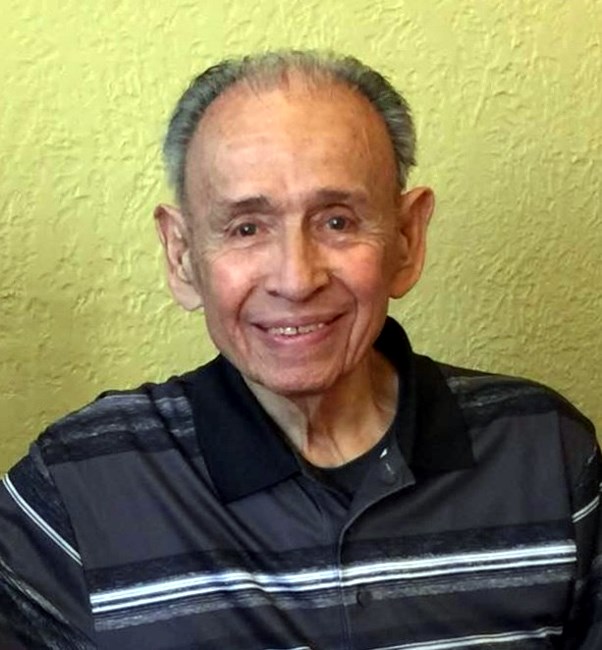 Danny E. Cortez, 92, born in San Antonio, Texas on April 25, 1926 left this world peacefully on August 22, 2018. He was preceded in death by his parents Eloy and Felicitas Cortez. His survivors include his loving and devoted wife of 70 years, Adela Cortez, his beloved children; Vivian Gonzales, Cynthia Calderon (Tito) and Eddie Cortez (Rebecca), his grandchildren Gary Gonzales (Jackie), Mark Gonzales (Kristie), Marcella Alvarez (Miguel), Vince Calderon (Jessica), Eddie Cortez II, and Elizabeth Perez (Christian). His great grandchildren include Sophia, Ava, Alexander, Nicholas, and Gabriella Gonzales, Aidan, Samantha and Max Calderon, Xavier, Jacob and Marissa Alvarez, Adriana and Emma Perez, great-great child Alyvia Gonzales. Danny is also survived by his brothers, Richard and Gilbert (Sophie) Cortez, his sister Vangie Casas and his loving extended family, brother and sisters-in-law Juan and Naomi Cavazos and Gloria Hinojosa. Danny also had numerous nieces and nephews and grand and great grand nieces and nephews. Danny attended San Antonio Vocational and Technical School a/k/a Tech High School. He proudly served in the U.S. Marine Corp and was assigned to the First Marine Division in China and Guam. Danny was also a member of U.S. Marine Corp Band. When he returned home he formed The Danny Cortez Orchestra and played at many events in San Antonio and the surrounding towns. Danny married the love of his life, Adela Cavazos in 1948. In 1952, he joined the San Antonio Fire Department where he proudly served for 38 years. He was extremely proud of his family and enjoyed family gatherings. He was a loyal fan of the San Antonio Spurs and the Dallas Cowboys. Danny will be greatly missed. Visitation will be on September 4, 2018 from 5-7pm at Roy Akers Funeral Chapel, 515 N. Main and the Rosary at 7pm. On September 5, 2018, the Funeral Mass will be at 9:45am at Holy Family Church at 152 Florencia. Burial will follow at Fort Sam Houston National Cemetery. The family requests in lieu of flowers that donations be made in his memory to Holy Family Church.
See more See Less

In Memory Of Danny Eloy Cortez