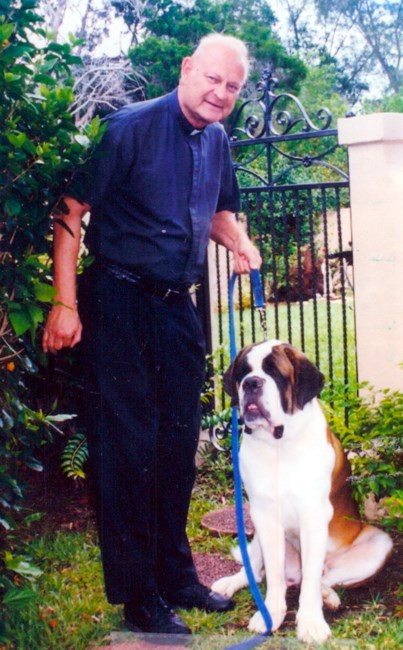 Father Edward G. Pick, founder and Pastor of St. Mary, Star of the Sea, Church on Longboat Key, died March 27, 2021, at the age of 86. Born in 1935 in Cincinnati, Ohio, Fr. Pick was the youngest of the three children of Herbert and Madeline Pick. At an early age, he and his family moved to Miami. Years later, at the urging of his uncle, Monsignor Edward Freking, he returned to Ohio and began his studies for the priesthood at St. Gregory’s Minor Seminary. Following graduation, he was accepted at Mount St. Mary’s Seminary of the West, also in Ohio. In 1960, Fr. Pick was ordained into the priesthood at St. Peter in Chains Cathedral in Cincinnati. His first assignment was to Sacred Heart Parish in Lake Worth, Florida, followed by an assignment to St. Mary’s Cathedral in Miami. Thereafter, he served at St. Joan of Arc parish in Boca Raton, where he also served as Chaplain at Mary Mount College, and Newman Chaplain at Florida Atlantic University. In 1966, he became Assistant Pastor at St. Sebastian’s in Fort Lauderdale, followed in 1968, by his appointment as Pastor of Sacred Heart Parish, Punta Gorda, and Our Lady of Mercy Chapel (a Mission Church) in Boca Grande. In 1973, there came a move which would change Fr. Pick and Longboat Key forever. He was offered the extraordinary opportunity to build a church and a church community on that idyllic island. Years earlier, Archbishop Hurley of St. Petersburg had purchased a 12 ½ acre site right in the center of the island. Fr. Pick quickly arranged to purchase it from the Diocese. Upon arrival on the key, he and his mother moved into a small house on Denarvaez Dr. just a bit south of Whitney Beach. Arrangements were made to rent a small room at the local firehouse every Sunday morning where Mass was offered for local Catholics, as well as for a flock of peacocks who, on a regular basis, strolled up the center aisle to hear Fr. Pick’s sermon. Daily Masses were celebrated at the Denarvaez house. The pastor and parishioners began the formidable task of building a church and a church community. The first Mass in the new church was celebrated on May 27, 1978, and the formal dedication ceremonies took place on the Feast of the Immaculate Conception, December 8th, forever more considered as founding date and Parish Feast Day. A unique attraction of the church is the sanctuary mural, painted by Frank Hopper, honoring the Eucharist as depicted in the 6th chapter of John’s gospel. In addition, Fr. Pick personally planted and cared for the glorious Indian Banyan trees arrayed at the front of the property along Gulf of Mexico Drive. Once asked to describe the most memorable moment or event in his life, he answered, “For me, it was my ordination in 1968. But it makes one think. There are so many turns in your life. I am here, but with another turn in my life, I could have been somewhere else. If I had to choose, I would not be anywhere else but on Longboat Key.” Visitation will be held on Tuesday April 6th from 4pm to 6pm with a Wake Service at 6pm at St Mary, Star of the Sea, 4280 Gulf of Mexico Drive, Longboat Key. Funeral Mass will be held Wednesday April 7th at 11am St Mary, Star of the Sea, Burial will be private. Funeral Arrangements by Robert Toale & Sons Funeral Home at Palms Memorial Park. In lieu of flowers, contributions may be made to the St. Mary, Star of the Sea, Tuition Fund, in honor of Fr. Pick. To donate online, please go to https://stmarylbk.weshareonline.org/index.aspx or St Mary, Star of the Sea, 4280 Gulf of Mexico Dr., Longboat Key, FL 34228.
See more See Less