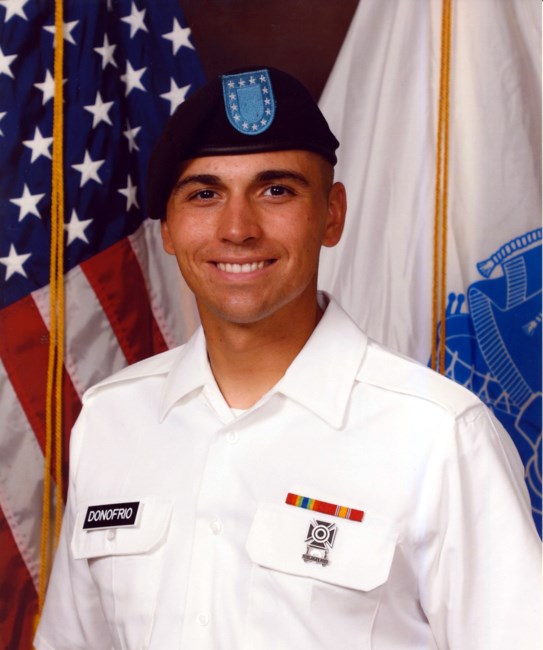 Victor Louis D’Onofrio of Sarasota passed away on March 25, 2020, in Fort Hood, Texas at the age of 22; he was born on October 1, 1997, in Livingston, NJ. Victor, “Donny”, was proud of his accomplishments in the U.S. Army as an M1A2 Abrams Tank Crewman and Specialist. He was known for his accountability, his compassion, humor, and charming smile. His unapologetic way of always being himself was truly a breath of fresh air. He was someone who if you told him to do something, you wouldn’t have to check if it was done. He was trustworthy and full of unconditional love and emotion for everyone who was present in his life. We will miss his hugs that took our breath away and his smile that has comforted many of us in our darkest times. We love you, dearly. He is survived by his loving parents Sherry Allen & Vincent D’Onofrio. Mother's fiancé, Tony DeLoach & Stepmother, Paola D’Onofrio. Big “sissy” Felecia French with niece Harley Terry and two little sisters, Miranda & Dalila D’Onofrio. Grandparents, Frances Evans, Louis Allen, Agostino & Clara D’Onofrio. Aunt Julia & Godfather Luciano DiNardo with cousins Michael & Brittany. Aunt Michelle Arntt & Uncle’s Mark, Steven Allen with cousin Brittnee, Charles & Christina Allen with cousins Nathan & Allyson. Celebration of Life and Military service will be announced as soon as more information is known about resuming social gatherings. Robert Toale & Sons Funeral Home @ Palms Memorial Park is entrusted with final care.
See more See Less

In Memory Of Victor Louis D'Onofrio