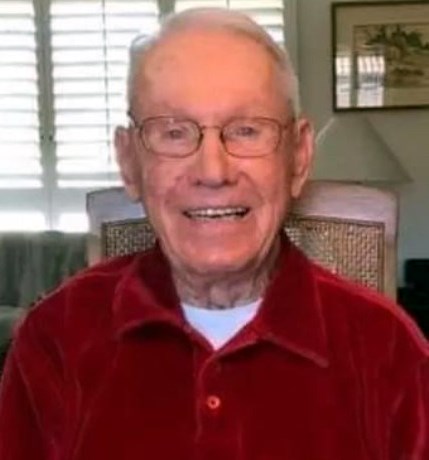 Raymond A. Henning of Scottsdale, Arizona passed away on January 19th, 2023 at 97 years old. He was born on March 1st, 1925 in Chicago, Illinois to Axel and Anna Henning. Ray served in the United States Navy from December 1942 to March 1946, after which he married his wife, Anne B. Henning, on February 7th 1948. They shared a 74 year long marriage full of love and laughter. Ray had a long career as an Electrical Engineer for Motorola and Commonwealth Edison, and had a passion for golf as well as his family. He was preceded in death by his daughter, Diane Haynes. He is survived by his wife, Anne, as well as his son, Mark Henning and daughter-in-law, Paula Henning. Ray leaves behind a large family, including his sister-in-law, Florence Hagemeister, his niece, Jan Hagemeister, and his son-in-law, Jim Haynes. He had several grandchildren: David, Brian, and Kevin Haynes; Lisa Hatch and Kelly Orozco; as well as many great-grandchildren: Ryder, Rylee, Axel, Natasha, Tatyana, Owen, Logan, Michael, Lena, and Javi. A celebration of life reception will be held at the Henning residence on February 25th, 2023 at 3:00 PM. Fond memories and expressions of sympathy may be shared at www.greenacresmortuary.net for the Henning family. In lieu of flowers, please make donations to Hospice of the Valley in Ray’s memory.
See more See Less

In Memory Of Raymond A Henning