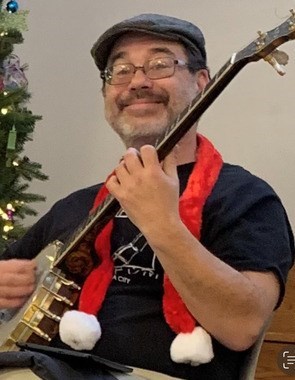 Kevin Ray Johnston passed away peacefully May 5, 2022 with family members by his side. He was born July 14, 1962 to parents Raymond and Carol (nee Wiggins) Johnston. Kevin was a long time aficionado and performer of the banjo. He was involved in teaching and organization for the preservation of America's only instrument and genre of music. Kevin was an instinctive musician from an early age. He began playing the banjo at age 5, and his strumming and rhythm came naturally. His ear was impeccable where he was able to play back a song heard on the radio, although he would tell you it wasn't perfect pitch. Kevin was the banjo guy for numerous Dixieland Jazz bands in the Pacific Northwest. He played with the Duwamish Dixieland jazz band founded by his father; and was seen regularly with other Dixieland bands, jazz societies, and numerous playout gigs. He also played for the opening of the King Dome, the World's Fair in Spokane and on stages in New York. Kevin also played the bass in rock groups that played music of the 1970's. His passion was music, and he was a well-known musician who performed for many years with well-known Seattle Dixieland bands. Kevin was a family man and a friend to many. Kevin is survived by wife Talicia, 5 children, Brennan Johnston, Ean Johnston, Caitlin (Kyle) Chamberlain, Jasmine Johnston, and Mathew Scrivener; 2 grandchildren, Landyn and Evelyn Chamberlain, mother Carol Johnston, sister Kimberly (Bill) Hollingsworth, and brothers Kenneth (Peggy) Johnston and Karl (Kayti) Johnston, along with numerous nieces, nephews, cousins, and friends. Kevin was preceded in death by father Raymond and his infant daughter Ashley. There will be a celebration of life for Kevin on May 14, 2022, from 1pm- 5pm at the Senior Center of West Seattle, 4217 SW Oregon Street, Seattle, WA 98116. Kevin will be laid to rest at Forest Lawn Cemetery in West Seattle.
See more See Less

In Memory Of Kevin Ray Johnston