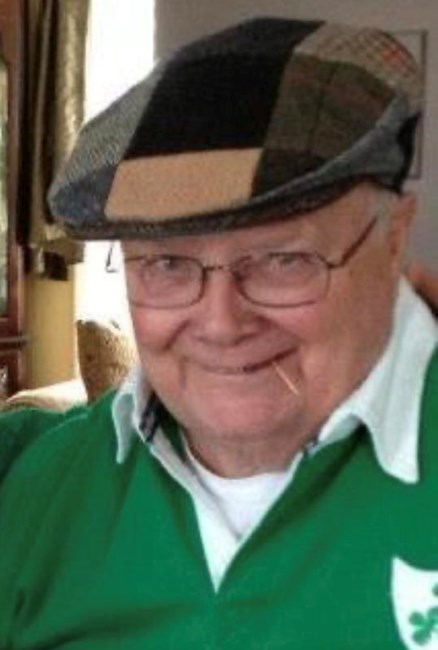 Harry “Shorty” Fitzgerald, 88, of Southington, beloved husband of Theresa Amadore Fitzgerald passed away on January 19, 2023 at Bradley Memorial Hospital. He was born in Bristol, CT to the late Maurice and Helen (Beckwith) Fitzgerald on November 26, 1934. Shorty was quite the athlete; he was captain of his soccer, swim and dive teams at Bristol High School. He was also a member of Lentini & Co., a touring acrobatic troupe that proudly performed on Ted Mack’s TV show, “The Original Amateur Hour”. Shorty and Theresa met while skating at Lake Compounce and they were married for 68 happy years. In addition to his wife, Shorty is survived by his children: Holly Carpenter of NY, Jody Benton of Plantsville, Shawn Fitzgerald and his wife Jill of Bristol, and Kelly Smith and her husband Scott (Smitty) of Old Lyme; grandchildren: Patrick Fitzgerald and his wife Bronwyn, Hannah Skinner and her husband Andrew; Zac, Billy, Keegan, and Brenna Smith, Kylie Benton and great-grandchildren: Samuel, Naomi, and Miriam Skinner, and Theodore “Teddy” Fitzgerald; as well as his brother: Henry (Hank) Fitzgerald and his wife Joan, and many nieces and nephews. He was predeceased by his sisters: Helen “Snookie” Gorski, Ana “Billy” Petit, and Marguerite “Sally” Robillard; and his son-in-law: Robert (Bob) Carpenter. Calling hours will be held on Saturday, January 28, 2023 from 12 to 2pm followed by a prayer service at 2pm at DellaVecchia Funeral Home, 211 N. Main St., Southington. Burial will be at a later date at St. Joseph Cemetery in Bristol. In lieu of flowers memorial donations may be made to Klingberg Family Centers at 370 Linwood St, New Britain, CT 06052 or Klingberg.org for the care and kindness provided to him in his youth. To leave an online condolence, please visit www.dellavecchiasouthington.com
See more See Less

In Memory Of Harry Fitzgerald