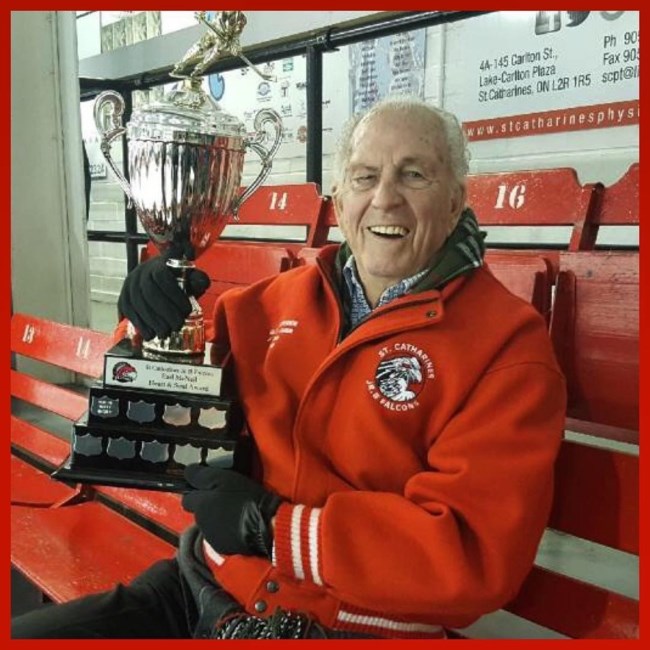 McNeil, Earl Gregory - passed away peacefully at the age of 97 at Pioneer Elder Care on Tuesday January 18th, 2022. Loving husband of the late May McNeil; beloved father of Len and his wife Helena, Lana and her husband Norm House. Loved grandfather of Scott McNeil, Kelly (Phil) Holjak, and Brent McNeil (deceased); Karen (Kevin) Parkes, Bradley (Paula) Simpson, and Alison (Jay) Landry great grandfather of Grace, Nicholas, Abigail, Jacob, Danielle, Laila, Paige, and Sydney. Beloved Uncle to all his many nieces and nephews. Earl served in the Canadian Navy and is a WW II veteran. He worked at General Motors in St. Catharines for 38 years and was was very active in the community, giving back in so many different aspects. He was Commissioner of St. Catharines Legion Hockey, coach in Legion Baseball, one of the founding members and President of the St. Catharines Junior B Falcons, President of Branch 24 of the St. Catharines Legion, recipient of numerous awards, the last being his induction into the St. Catharines Sports Hall of Fame. One of his fondest memories was attending the 1972 Russia / Canada hockey series in Moscow and while there dining with Rocket Richard. Many thanks to the staff at Pioneer Elder Care, Home for Seniors with Dementia and Alzheimer, for the wonderful care that they provided to our beloved father. In keeping with Earl’s wishes, cremation has taken place and an interment will take place at Victoria Lawn Cemetery at a later date. Donations to the Canadian Legion - Branch 24, would be appreciated. Arrangements entrusted to Hulse & English Funeral Home & Chapel (905-684-6346). Online tributes and condolences may be made at www.hulseandenglish.com
See more See Less

In Memory Of Earl Gregory McNeil