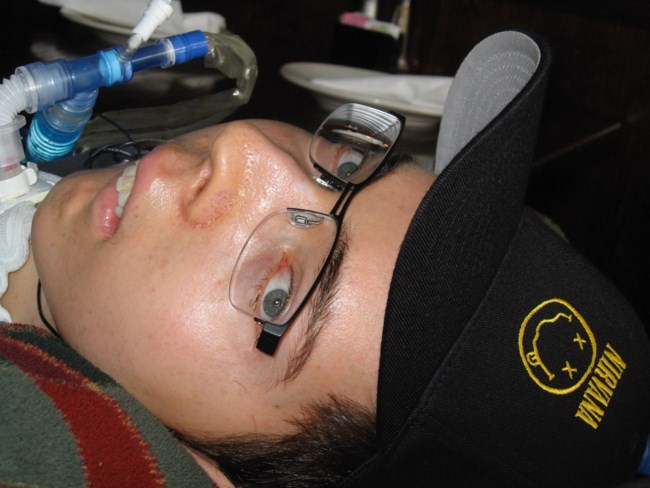 Please see new service date and time below due to the recent spike in COVID-19 cases in the Tampa Bay Area. Michael Phillips passed away early Thursday morning, March 26th. He was 39. For his entire life, Michael was a staunch advocate for persons with disabilities. In 2017, he appeared on MSNBC’s The Last Word with Ari Melber (https://www.msnbc.com/the-last-word/watch/mother-and-son-medicaid-isn-t-about-politics-it-s-about-lives-975086147987) to advocate on the importance of Medicaid for persons with disabilities. He also worked with companies like Apple, AssistiveWare, and Control Bionics to develop assistive technologies that could be used widely in the disability community. On 1/21/08, Mike choked on some pineapple juice, aspirated, coded, and had to be resuscitated by (what Mike would describe as) “spectacular doctors, nurses, and paramedics,” at Tampa General Hospital. As Mike put it, “I died, but only for a little.” The incidence required that he be intubated, which eventually led to a tracheotomy, which meant he could no longer speak. Mike quickly used his assistive technology skills through software like SwitchXS, Proloquo, Keystrokes, and text-to-speech technology, which allowed him to regain his voice through his computer. Later on in 2008, Mike appeared on Showtime’s “This American Life” hosted by Ira Glass. The episode was titled “Escape”, and it chronicled Mike’s early life living with a trach. At Mike’s request, Johnny Depp played his voice during the show (Edward Norton was unavailable). The episode won 2 Emmys, and Mike got to walk the red carpet the night of the awards. Soon after the show aired, Mike worked with Peter Shann Ford to help develop his NeuroSwitch. The technology involved placing sensors on his forehead, which would pick up on small neural impulses when he would raise his eyebrows. This was his gateway to the world. Early on in his adult life, Mike was a photographer, using a Nikon N90 camera and special assistive technology to point and shoot. He could be found on the sidelines of Bucs games shooting the action. One of his photos even made it into the Bucs game-day magazine. He also photographed such celebrities, politicians, and persons of interest as David Letterman, Steve Jobs, Bill Clinton, Al Gore, Jeb Bush, Dan Rather, Mario Lemieux, and Tom Brocaw, among countless others. In addition to photography, Mike had a passion for writing. One of his stories was featured in a zombie short story book called Rigor Amortis. His story was titled, “Waking Up Someone Who Isn’t Me.” His short story “One Passing Dusk” appeared in the book The Best of Friday Flash: Volume 2. He also appeared in Weird Tales Magazine with a story titled “You’re a Stain.” He blogged heavily, and had quite the following at www.lithiumcreations.com. Mike loved music, and had a custom playlist that included his favorite artists, which he would listen to before every tracheotomy procedure, which would typically occur every 5 weeks for 13 years. That list of artists included Aimee Mann (who he saw in concert several times, and even got to meet Aimee), Nirvana, Alanis Morissette, Elliott Smith, Tori Amos, and Dar Williams, among many others. Mike was an avid tattoo enthusiast, and had close to 100 tattoos. The majority of those were given to him by his friends at Las Vegas Tattoo in Ybor, including by friends Doc, Belle, and Colt. Over the years, Mike had many personal care assistants. Some of his favorites included Tivoli, Celeste, Steven, Kim, Dani, Yanaris, and Jillian — among many others. Mike had some of the best doctors in the world, including Dr. Pahya, Dr. Mangar, Dr. Nel, Dr. Woodard, Dr. Wilson, Dr. Schnapf, Dr. Halal, and Dr. Anderson. Mike also fired a gun using assistive technology (which he loved), and also rode a horse (which he hated). At MDA camp when he was a kid, he was a back-to-back Ms. Wahini Contest champion. Mike was a gamer, too. He was a internationally-ranked Hearthstone player (once as high as 3rd). A pretty badass Necromancer in World of Warcraft, and in general, loved watching his brother Brian (who was bad at games) play (and mostly lose) to Robby “the Bear”, Lee, Wes, and Justin — among many other friends growing up, like Karl and Ryan. There were also many other special people in Mike’s life, including Tess, Sara, and Monica. Above all, Michael was a beloved brother, son, uncle, nephew, and cousin. He is survived by his mother and lifelong caregiver, Karen, his step father, Randy, his brother, Brian, his sister-in-law, Jenna, his niece, Katharine "Kit Kat" Clay, his uncles, Jack and Bob, his aunts, Sue and Lisa, and his cousins Johnny, Robby, Sandy, Sean, Kevin, Kristen, and Amy. In lieu of flowers, please consider donating to Michael’s GoFundMe (https://www.gofundme.com/f/help-for-the-clay-family ) which will help the family cover final living expenses, and used to make a donation to the Florida Alliance for Assistive Services and Technology Tampa. Visitation will be held on Friday, September 4th from 6pm to 8pm at Blount Curry Macdill, 605 S. Macdill Ave, Tampa FL. Funeral Service will be held on Saturday, September 5th at 12pm at St. John the Baptist Greek Orthodox Church, 2418 W Swann Ave, Tampa, FL. Interment will follow at Myrtle Hill Memorial Park. To learn more about Michael’s life and legacy, check out his episode of This American Life on Showtime (https://m.youtube.com/watch?v=jJ_DVnPdUf0), or read about his passing in the Tampa Bay Times (https://www.tampabay.com/news/2020/03/26/michael-phillips-tampa-disability-advocate-dies-at-age-39/).
See more See Less

In Memory Of Michael Josef Phillips