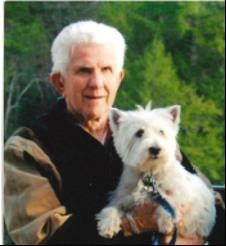 Ralph Russell Peery, age 95, passed away on Wednesday, July 6, 2022, in Tampa, Florida. He was born on June 10, 1927, in New Haven, Connecticut, and grew up in the coastal town of Madison. The second child of Gordon and Nancy (Johnson) Peery, until adulthood he went by the name Ralph, but transitioned to Russell for the remainder of his life. He attended public schools in Madison with his older sister Sally and played drums in the school band. Immediately following high school he joined the Navy and soon received an honorable discharge in 1947. He attended Gettysburg College through the GI Bill graduating in 1949 with a degree in history. Having decided to pursue a career in the Christian ministry, he completed a graduate degree at Andover Newton Theological Seminary in Newton, Massachusetts. It was at seminary where he met his first wife, Margaret (Peg) Morse, a musician. With their newborn son Gordon in tow, they moved to Alfred, Maine, where Russ served as the minister for the Alfred Parish Church. While in Maine, their daughter Celeste-Wildflower was born. Following a ministry position in Manchester, Connecticut, Russ assumed leadership of South Congregational Church in Middletown, CT. It was at this time, during the 1960s, that he distinguished himself as a vibrant preacher and effective leader, immersed in the civil rights movement and protests against escalation of the war in Vietnam. While not all parishioners shared his perspective, he was supported and respected in the community. In 1970, newly divorced, he became the chaplain and administrator at Avery Heights, a pioneering retirement facility that focused on providing independent living opportunities for the elderly. He met and married Merle (Ridinger) Weingart in 1971 and the two merged their families and shared fifty years of devoted marriage. Russ and Merle lived in Connecticut for many years and during this time he transitioned from the ministry to woodworking due to a defining experience Russ had while attended a woodworking session at the Penland School of Crafts in North Carolina. In the 1980s, they moved to Columbia, Tennessee, where Russ established an impressive woodworking operation. Merle assisted him in both the production and marketing of his products. They especially enjoyed attending craft shows and meeting other artists. While woodworking remained his primary passion, Russ also assumed a part time ministry job serving small churches across Maury County, Tennessee. Years of preparing sermons honed Russ into a prolific writer and over the course of his life he authored several books of poems and other reflections. For many years he wrote poetry on a daily basis which he shared via an email listserv and a website. Russ and Merle retired to Pleasant Hill, TN, before moving to Florida to be close to their daughter Kiki. It was with her that Russ was living when he passed away. His death occurred one month following Merle’s and just weeks following his 95th birthday. His children, Gordon Peery of Nelson, New Hampshire, Wildflower Peery of Opportunity, Montana, and Kiki Caruson of Tampa, Florida, all survive him, as well as numerous grandchildren, great grandchildren, and nephews and nieces. His beloved sister, Sally Spiegel, predeceased him in 2018. A memorial service for Russ and Merle will occur in October in Columbia, Tennessee, where they will be interred. In lieu of flowers, memorial contributions may be made to the Center of Hope located in Tennessee. All donations made in Russ or Merle Peery’s name will be matched 1:1 by the family. To make a donation visit the link below. Checks may be mailed to Center of Hope, P.O. Box 1961, Columbia, TN 38402 to the attention of Brooke Osborn. To learn more about the mission and services of the Center of Hope visit: https://centerofhopetn.org Merle’s obituary may be accessed here: https://www.dignitymemorial.com/obituaries/tampa-fl/merle-peery-10782427
See more See Less

In Memory Of Ralph Russell Peery