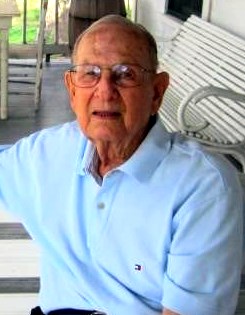 It is indeed with sadness and grief that we announce the death of Robert Lee Schultz (Bob). However, it is with great love, pride, and reverence that we respectfully share some of his life’s story. Bob was born on June 16, 1921 in Leroy, Texas to Alvin and Emma Schultz. He had 2 sisters, Viola and Esther, and one brother, Wilburn, who have all preceded him in death. Bob died on September 25, 2021 at his residence at Celebration Senior Living in Denison, Texas. He was very much loved by the staff and he loved them as well. Bob lived independently until he was 97 years old, moving to Assisted Living to “get his money’s worth out of his long-term care policy he had bought many years ago.” He enjoyed being the center of attention and “being spoiled rotten” by the staff as he quickly became a favorite. Bob attended Brenham schools all the way through high school. It was in high school that he met the love of his life, Elizabeth Seward. She was a Cheerleader and he was in the band. In addition to being in the Brenham Cubs band, he also had his own orchestra (Bobby Lee and his Orchestra) and began playing his trumpet at age 12 for dances around the county. After graduation, Bob went to Texas A&M, beginning a love for that school that existed to his death. He was so proud of being “Class of 44.” In 1942, At the end of their Junior year, Bob and his classmates were awakened one morning and told to report to the Mess Hall, where they were given uniforms and drafted into the U.S. Army to join the WWII efforts abroad as Corporals. It was just that quick. When interviewed, so that a position could be found that best fit his skills, he said that he could shoot a rifle… A statement he said that he immediately regretted because he was assigned to the Fifth Army in the 351st “Spearhead” Infantry Regiment, 88th Blue Devil Division that fought in the Italian Campaign. He later said that he sure wished he had told them that his special talent was driving. That way maybe he would have been given a tank instead of a rifle with no protection. He was sent to Officer Training School at Ft. Benning, Georgia where he was commissioned as a 2nd Lieutenant. By the end of the war, his rank was that of 1st Lieutenant. Prior to leaving for Africa and then on to Italy, Bob married his high school sweetheart, Elizabeth Seward, in a small church in Yuma Arizona where he was enrolled in special training. Bob and Elizabeth and a friend and his new wife then drove cross country to Roanoke, Virginia, where he traveled on a freighter that crisscrossed the ocean to dodge “U boats” to Algiers, Africa. Bob was overseas 18 months during which time he earned the Combat Infantryman Badge, a Bronze Star, and 2 Purple Hearts. When Bob returned to Brenham after the War, he reenrolled in Texas A&M, completed his degree in Wildlife Management and a second degree in Business Administration. Upon graduation, he interviewed with the J.C. Penney company in downtown Houston and was hired as a management trainee. This began his 40 year career with the company. Bob first became a J.C. Penney manager in Portales, New Mexico. His next store was in Port Arthur, Texas. He moved his family to his next store in Clovis, New Mexico, then onto San Antonio, Texas, followed by Jefferson City, Missouri. From Missouri, Bob accepted the management position at Amigo Land Mall in Brownsville, Texas, followed by his final store in North Little Rock Arkansas. He enjoyed great success as a store manager and was acknowledged as being one of the top J.C. Penney store managers in the nation. Right before retirement, Bob lost Elizabeth and moved to Temple, Texas to be closer to his daughter, Betty and her daughter, Carey. He and Elizabeth had been married for almost 45 years . He eventually remarried Christina Romine, an old family friend, and they enjoyed 17 years of a happy marriage until she too, passed away. Bob loved the Lord and was a long-time member of Christ Episcopal Church in Temple, Texas. He is survived by his two sons, Robert Schultz of Columbia, Missouri, Bill Schultz and his wife, Carrie of Land O Lakes, Florida, his daughter Betty and son-in-law, Ken Higdon of Denison, Texas and granddaughter, Dr. Carey Brooks who resides with her husband, Craig, and 3 children, Ella (11), Garrett (10) and Caleb (6) in Celina, Texas. Through his marriage to Christina, Bob happily gained additional family members: 2 more sons, Roger Romine and his wife, Sandy of Newland, North Carolina and Dr. Lee Romine and his wife, Rindy of Natchitoches, Louisiana. Grandchildren include Chrissy Dollar and her husband, Jon, with their son Leo of Austin, Texas, Michael Romine of Dallas, Texas, Holly Romine of Santa Barbara, California and Hannah Horr of Sand Diego, California. Bob was a role model to many, a successful businessman, and a wonderful husband, father, and grandfather. He was a great friend to many. He will be very missed and though not with us in physical body, he will always remain in our hearts.
See more See Less

In Memory Of Robert Lee Schultz