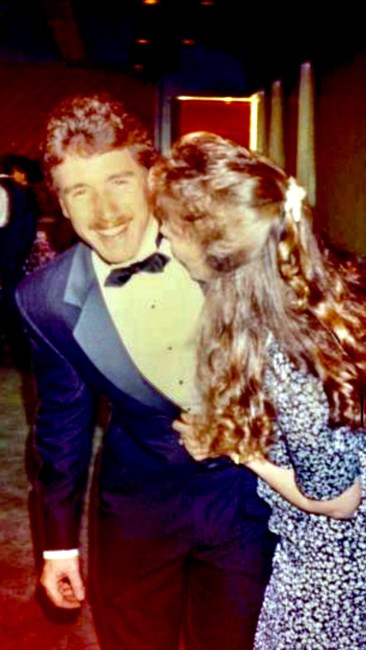 William (Bill) Joseph Sweeney, resident of Willis, TX, went home to be with Jesus on December 30, 2020, at age 60. His 24-year battle with ALS has finally ended, and he is now celebrating in heaven with strong, walkable legs on the streets of gold and worshipping Jesus among the angels with a new, strong voice. Bill was filled to the brim with grit, wit and an unwavering faith in God and died living out 2 Timothy 4:7 with confidence, "I have fought the good fight, I have finished the race, I have kept the faith." Bill was born on October 5th, 1960 in Milton, Massachusetts and grew up in the suburbs of Chicago. As a child, Bill enjoyed rough-housing with his nine siblings and other large Irish Catholic families on Stewart Avenue in the charming town of Libertyville, Illinois. Bill married his wife, Mary, on November 2nd, 1985 in Houston, Texas, and went on to have two beautiful girls, Lauren & Leah. In addition to being a dedicated and loving father, Bill also loved serving as a deacon at his home church, golfing and building relationships through his job as a successful salesman in the grocery industry. In 1996, at age 36, Bill was diagnosed with ALS. Within a year of being diagnosed, he could no longer walk or talk and had to resign from his job. Despite the drastic life-altering and difficult trials Bill has experienced, he lived on the promise from Romans 8:28, "And we know that God causes all things to work together for good to those who love God, to those who are called according to His purpose." Although the doctors gave him a 3-5 year life expectancy on the day of his diagnosis, he kept living one miracle year after another! Bill knew his time on earth was fleeting but made the most of his time by focusing on eternity. Thankfully for amazing technology, Bill used a special computer with an eye-tracking camera to study his Bible each day, communicate with friends and family, and serve as an online missionary for GMO (Global Media Outreach). He also created a blog, unshakablehope.com, to encourage others. Some words that people often use to describe Bill are "humorous", "hero", "beautiful writer", "mentor", "father figure", "man of prayer", "warrior", "full of faith", and "wise". Bill joins his parents, Paul and Marilyn Sweeney, and many others in heaven. He is survived by his wife and caregiver, Mary Sweeney and his children, Lauren Mulvey and Leah Sweeney, and his son-in-law, James Mulvey, and his three grandchildren, Jude Mulvey, Peyton Mulvey, and Claire Mulvey; they will greatly miss their "Pops". "Billy" or "Wilbur" will be deeply missed by his nine siblings and their spouses: Paula Corey, Chuck and Ellen Irons, Mark and Sonja Sweeney, Charles Selle and Janet Sweeney, Ed and Vicki Sweeney, Vin Sweeney, Brad and Lyn Ure, Peter Sweeney and Mike and Jan Sweeney, 18 nieces and nephews, and many more dear family and friends. We are also so grateful for Sharlene Hempel, who aided Mary in caring for Bill the past thirteen years. Bill always believed it was the prayers and love of these incredible friends and family that strengthened him through this long journey. "So we do not lose heart. Though our outer self is wasting away, our inner self is being renewed day by day. For this light momentary affliction is preparing for us an eternal weight of glory beyond all comparison, as we look not to the things that are seen but to the things that are unseen. For the things that are seen are transient, but the things that are unseen are eternal." -2 Corinthians 4:16-18 Services are scheduled for Thursday, January 7th, 2021 at The Ark Church in Conroe, TX in the main sanctuary. Visitation: 10:00am Funeral: 11:00am Address: 450 Humble Tank Rd, Conroe, TX 77304 Face masks are required until seated. The main sanctuary is large and has freedom for everyone to be spread out due to covid. The burial will be private. The funeral will also be recorded and uploaded to the internet on Thursday, and the link will be posted to this page and on unshakablehope.com when uploaded. In lieu of flowers, if you would like to make a donation, please consider giving to the ALS Association or Bill & Mary Sweeney's GoFundMe account to help with funeral costs (https://www.gofundme.com/f/bill-amp-mary-sweeney). If you do want to send flowers, please send to The Ark Church. Memories and expressions of sympathy may be shared at https://www.dignitymemorial.com/obituaries/the-woodlands-tx/william-sweeney-9975646 for the Sweeney family.
See more See Less

In Memory Of William Joseph Sweeney

Though services have passed, you can still send flowers to be placed on William Joseph Sweeney's grave.