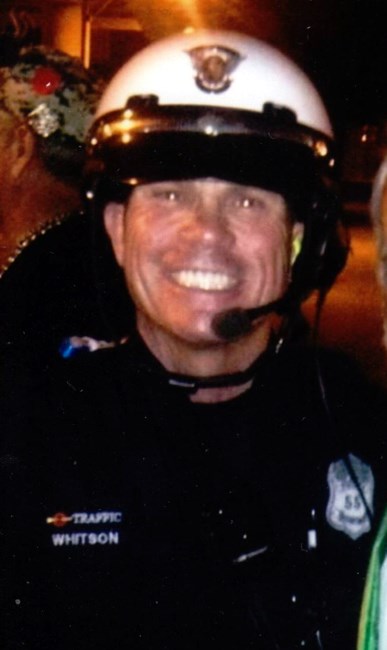 JERRY RAY WHITSON entered rest on Sunday evening, January 20, 2019, surrounded by his family, after battling cancer for several years. Jerry was born in Texarkana, Texas on September 27, 1961. He was preceded in death by his father, Joe D. Whitson, Sr., his mother, Martha H. Whitson, and his brother, Joseph David Whitson, Jr., Ph.D. He is survived by his wife, Stephanie Lawrence Whitson, his eldest daughter, Shea Whitson of Memphis, TN, his son, Nathan Whitson, of Universal City, Texas, and his youngest daughter, Macie Whitson, of Universal City, Texas. In addition, he is survived by his brother, Terry Whitson and Terry’s wife, Cynthia Whitson, both of Schertz, Texas. In addition, he is survived by numerous cousins nieces, nephews, and relatives. Jerry was a strong Christian. He put on Christ in baptism at Corbett Church of Christ, United Kingdom in 1974. Having united himself with Christ early in life, he was blessed in his 30s to find his soul-mate and wife, Stephanie Lawrence. They were married in 1995, and their love never faded. For many years, he was a member of the Cornerstone Church, where he and his family were active. Recently, in view of his failing health, he moved to a church community closer to home, and he and his family joined the First Baptist Church in Universal City, Texas. Jerry served Our Lord as a law enforcement officer throughout his adult years. He first served Our Lord as a park ranger in Arkansas. He applied to and was accepted by the San Antonio Police Department in 1986. He was a patrol officer, a training officer for many years at the Police Academy, and a Traffic Division officer assigned to motorcycles. There was no part of his job that Jerry did not love. He was example for Christ to his brother policemen and to those with whom he came into contact. He retired from the San Antonio Police Department in 2016, wanting to devote time to his fitness and fitness products business. Throughout his life, since the age of 14, Jerry was an avid fitness enthusiast and later on in life trained others in physical fitness. All of this he did to the Glory of God and for the good of his fellow human beings. When Jerry was diagnosed with cancer, he referred to it as his “opportunity” to glorify God through the way he handled his illness. He did exactly what he set out to do. More than a few were brought to Christ or returned to Christ through his witness and that of his wife, Stephanie. The effects of his witness will continue long after his journey home. For the past year, Jerry made memories with his wife and children, going places and doing things they had always wished to do but had been putting off. He squeezed every drop of life God granted him until his passing. Jerry will be greatly missed by his family and his friends. We grieve not for him but for us, for we are better for having knowing him, yet we realize we will not see his contagious smile, his sharp sense of humor, and his genuine love this side of eternity. Colonial Funeral Home, 625 Kitty Hawk, Universal City, Texas 78148, will undertake the funeral arrangements. Visitation will begin at 5:00 p.m.—8:00 p.m. on Friday, January 25, the funeral service will be held at First Baptist Church in Universal City, Texas, on Saturday, January 26, at 11:00 a.m., followed by internment at Rocky Creek Cemetery in Johnson City, Texas. In lieu of flowers, monetary donations can be made directly to the family for distribution to the charities of Jerry's stated desires.
See more See Less

In Memory Of Jerry Ray Whitson