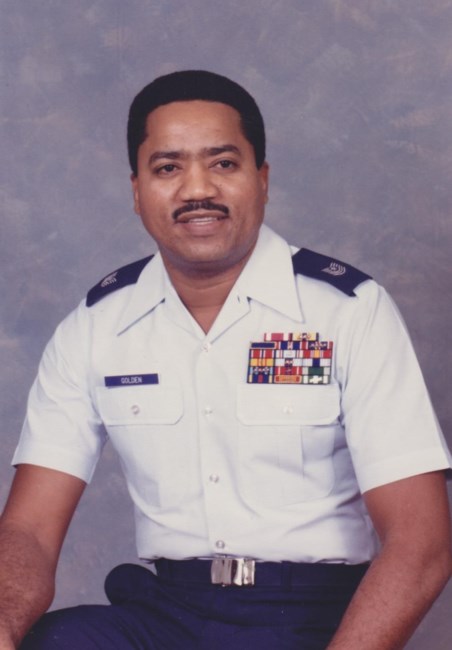 Larry “Goldie” Golden, the son of Frances and Henry Robertson (both deceased) was born on December 29, 1948 in Indianapolis, Indiana. He is survived by his wife Delia, son Garland, and daughters Kendal, Shannon, and Gail. He is also survived by his brothers Stevie and Tabari and sisters Janice, Yvonne, Linda, Sheila, Barbara and Francine; aunts Mildred and Katherine and numerous cousins, nieces and nephews. In 1968, Larry volunteered to join the United States Air Force (USAF) and took the oath to defend his country. He served three one-year tours of duty at Combat Support Bases in Southeast Asia at the height of the Vietnam war. He was a Vietnam/Gulf War Era Veteran who always said the best education that prepared him for the competitive training and professionalism demanded by the USAF was the excellent 8th grade education he received at George Washington Carver (P.S. School #87 K-8th grade). Larry set high goals for himself; he completed his H.S. GED, graduated from the College of the Air Force with an Associate Degree and earned his Bachelor Degree from Park University. He also attended and graduated from both the Air Force Non-Commissioned Officer Leadership School and the Air Force Non-Commissioned Officer Academy and he completed (by correspondence) the Air Force Senior Non-Commissioned Officer Academy. Larry also attended and graduated from three different Air Force Technical job training schools and was highly skilled and qualified to work in each job specialty. Larry held a top secret security clearance and earned a plethora of Air Force awards and decorations to include the Meritorious Service Medal, five Air Force Commendation medals, small arms expert marksmanship ribbon, Air Force good conduct medals, Vietnam Service medals, Republic of Vietnam Campaign Medal with Palm, and many others. He served at several Air Force installations in the Philippines, Japan, Korea, Thailand, TX, AR, GA, OH, CA and MS. Larry loved all sports and was a fan of the San Antonio Spurs, Kansas City Chiefs, Lebron James (the G.O.A.T.), Kareem Abdul Jabbar, Venus and Serena Williams and The Indy 500). He never relocated back to Indianapolis but was extremely happy to visit his parents and family and looked forward to many visits over the years. He loved the movies and great actors like Sidney Poitier, Robert DeNiro, Denzel Washington, Morgan Freeman, Marlon Brando, Humphrey Bogart and always said Richard Pryor, Redd Foxx and W.C. Fields were the funniest men who ever lived. Larry was a lover of all types of music and had a huge record collection. Some of his favorites were: Miles Davis, John Coltrane, Mandrill, The Isley Brothers, Isaac Hayes, Nate Dogg, Santana, Michael Jackson and the Jackson 5, Nat King Cole and Frank Sinatra. He believed Sammy Davis Jr. was the greatest entertainer, period. Larry spent his entire life loving and protecting this country and had hoped to see it return to its former glory or grow to be an even greater country after the latest negative experience.
See more See Less

In Memory Of Larry Eugene Golden