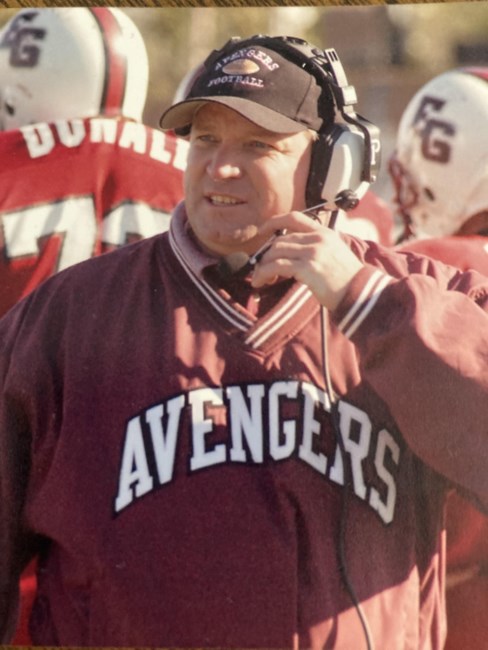 Robert J Corr, age 64, of Warwick, Rhode Island passed away on Wednesday, July 6, 2022. Born in Providence he was the son of the late J. William Corr Jr. and Mary Bernadette (Black) Corr. Bob's occupation was an insurance agent. Bob was active in the East Greenwich Rotary and served as president for a period of time. From an article by egnews | Apr 22, 2018 Robert was in the East Greenwich High Class of 1976: A first team All Class B selection in football at EGHS. Also a member of the track team. Next, at Governor Dummer Academy he played football and lacrosse and was named 2nd team Boston Globe Independent Prep Team as running back. At Muhlenberg College in Pennsylvania, Bob was a four-year starter in Lacrosse and a three-year starter in football. He came to EGHS as a Freshman football coach and also did JV and assistant varsity before taking over the reins in 2002. As Head Varsity Coach he turned out undefeated regular season team in 2004, which lost in playoff semi-finals. In 2005 EG lost in semis again, but in 2006 Bob piloted the Division iii Super Bowl champions. 2007 saw them rush into the semi-finals again before losing. Corr founded the East Greenwich Alumni Football Association, which started the now traditional Annual Thanksgiving Eve Pasta Dinner. Bob was also inducted into both the East Greenwich and Muhlenberg College Athletic Hall of Fame. Bob loved his family and friends dearly and will be missed by all that knew him. He leaves his siblings, Kathy Corr of Newtown, PA, Paula Rogers and her late husband John of Warwick, John Corr and his wife Becky of Midway, GA, his ex-wife Kelli Gomeau and her son Brandon Gomeau, his nephews, Bill Rogers of Falmouth, MA, Joe Rogers of Warwick, Michael Rogers of Warwick and Kevin Corr of Midway, GA. Services are private and at the convenience of the family. A gathering to remember Bob will be planned in the near future.
See more See Less

In Memory Of Robert J Corr