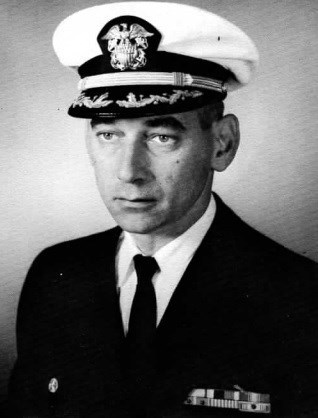 Russell Alfred Marcellus, 93, of Seabrook, Texas passed away on January 15, 2022. Russell was born in Fair Haven, New Jersey on September 17, 1928 to Alfred and Elizabeth Marcellus. He was married to Beverly Marcellus and together raised seven children. He enjoyed cruises with Beverly and spending time with family. After two and a half year as a Naval Aviator, Commander Marcellus began his surface Navy career aboard the battleship New Jersey. Other assignments included the USS Pillsbury (CDFR-133), the General Line School, and Fleet Training Group, Guantanamo Bay Cuba. After receiving a bachelor of Science degree at the Postgraduate School in 1961, Commander Marcellus was the executive Officer of the USS Watts (DD-561) and later the USS Sullivans (DD 537) and the USS Yosemite (AD-19), flagship for commander Cruiser Destroyer Force, U.S. Atlantic Fleet. He commanded the USS Gearing from April 25, 1966 to July 1, 1967. He was awarded the China Service Medal, the Navy Occupation Service Medal, the National Defense Service Medal, the Korean Service Medal, the United Nations Service Medal and the Republic of Korea Presidential Unit Citation, the Armed Forces Expeditionary Medal and the Navy Expeditionary Medal. He retired July of 1973. Russ was preceded in death by his parents Alfred Marcellus and Elizabeth Wonderly Marcellus and brother Dr. Harvey Lyons Marcellus. He is survived by his loving wife of 71 years Beverly Marcellus; sons Dr. Harvey W. Marcellus and wife Vicki Marcellus, Steven M. Marcellus, Alfred R. Marcellus, Matthew A. Marcellus, Michael T. Marcellus and wife Nan Williams Marcellus, and Dr. John E. Marcellus; daughter Elizabeth Marcellus Newbury; 20 grandchildren and 17 great-grandchildren. A memorial service for Russ will be held Thursday, January 20, 2022 at 2:00 p.m. and a reception to follow from 3:00 p.m. to 5:00 p.m. In lieu of flowers, donations can be made to Wounded Warriors or Tunnels to Towers in Russ' name. Fond memories and expressions of sympathy may be shared below for the Marcellus family.
See more See Less

In Memory Of Russell Alfred Marcellus