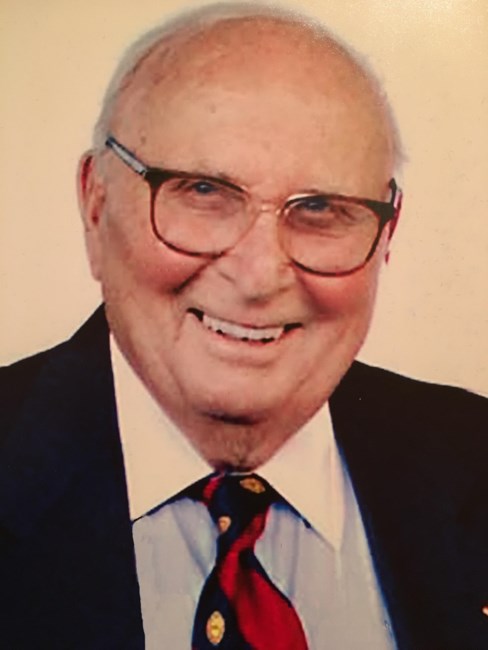 Kenneth Ray La Voy, Jr., died peacefully in his home in Palm Beach, Florida on January 9, 2019 surrounded by his loving family. He is survived by his three daughters, Lorraine La Voy O'Neill and her husband Bill, Alison La Voy and her husband Bob as well as Anne La Voy Guerra and her husband Bob. Mr. La Voy's grandchildren include Keith O'Neill and his wife Kathryn, Darin O'Neill, Leigh O'Neill Greene and her husband Bobby, Christopher Guerra and his wife Teresa and Elizabeth Guerra. He is also survived by five great granddaughters. He was preceded in death by his wives Helen Woodhouse La Voy and Lucilla Carmichael La Voy. Mr. La Voy was born on January 2, 1923 in Hudson, New York to Vivian Everleigh La Voy and Kenneth Ray La Voy. He graduated from Syracuse University in 1943 and Harvard Law School in 1950. During World War II he served as a United States Naval Officer from 1943 through 1946, seeing action on D-Day at Normandy Beach as well as in the Pacific Theatre. While living in Montclair, New Jersey with his family he joined the Wall Street law firm of Dewey, Ballantine, Bushby, Palmer & Wood, where he spent his entire legal career. He and his family lived in Brussels, Belgium from 1963-1966 where he ran both the Brussels and Paris offices for the firm. In retirement Mr. La Voy spent summers in Bay Head and Montclair, New Jersey and winters in Palm Beach, Florida. He held memberships in the Harvard Club, The Montclair Golf Club, Bay Head Yacht Club, The Everglades Club, The Beach Club and The Society of the Four Arts. Mr. La Voy was Governor General of the Society of Colonial Wars in the State of Florida, Vice-President of the English-Speaking Union and president of the One Royal Palm Way Association. Mr. La Voy was a voracious reader and his sense of humor was well known and appreciated. Not as well known was his lifelong delight in Winnie-The-Pooh books, stories of Charlie Brown, Snoopy and the rest of the Peanuts gang, and all dachshunds great or small. Interment will be private in Montclair, New Jersey.
See more See Less