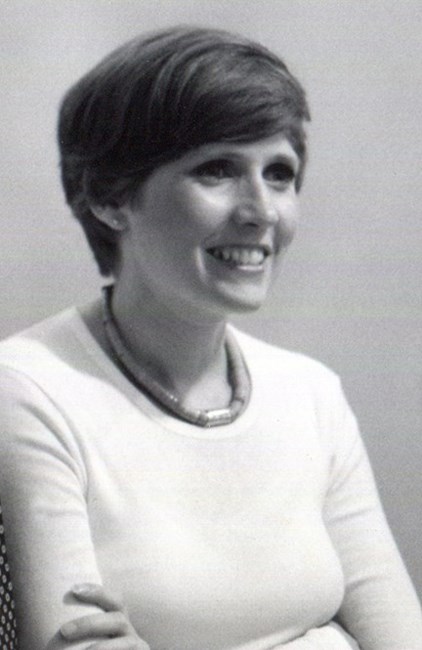 Mary Ann Blair Pollei was born May 29, 1944, the second of 4 children born to Elsa Olga Morf and Seth Millington Blair. A self-described skinny, funny-looking kid, with asthma, her childhood was spent barefoot, with her older sister Ida and her younger brothers Brent and Paul, exploring the irrigation canals around their home and playing with crawdads, tadpoles, lizards, snakes, toads and anything else they could catch. After graduation from Yuma Union High School (“Proud home of the Criminals”), she made her way to Brigham Young University. She graduated from BYU with a degree in Speech Pathology, and after graduation she married David Cannon Pollei in the Mesa Arizona Temple in 1969. A couple of years later they ended up in Kansas City, where they started their family, welcoming Amy and Jennifer. A stint in Chicago added Stephanie, and then a move to New York brought James and Michael. Not only did she round out her family in New York, but she found a full group of friends that she remained close with her entire life. After 5 years in New York, a job opportunity pulled them to California, where Mary Ann rejoined the work force at UC Davis in the Intensive English Department, helping students from around the world work on their professional English skills. In Davis, Mary Ann became a substitute mother for many of the International students who were there to study and learn English. While in Davis, Mary Ann also experienced a life changing trial when her youngest son Michael was in a near drowning accident that left him handicapped and unable to care for himself. The accident had a profound effect on the whole family. She recalled a moment where she was seeking relief from the heartache of the experience in the Temple and she felt overcome with a feeling that the trial occurred to help the family grow, especially the kids. After Michael passed away at age 12, and kids were all graduated, they moved to Utah. They built their dream house, an arts and crafts place with a spectacular view of the mountains. Here she happily embraced some of her favorite occupations: a consummate reader, serving in the church, and welcoming her 13 grandchildren into the world. After over a decade in Utah, Mary Ann and David would face another life changing trial with the cruelest April Fool’s Day joke ever. On April 1, 2011 Mary Ann suffered a stroke that left her trapped in a body she could not control. Like her son Michael, she lived the last ten years of her life being served by countless friends and members of her congregations. This service truly shifted the perspective of her life. In a talk scribed by her friend Lara and given by her Grandson Gunnar she said, “When you have a tragedy in your life and your life is stripped down to the bare essentials you see that most of that rushing and the things you thought were important don’t matter. What matters most is kindness. Life is simple: be kind. I have been the recipient of immense compassion since my stroke, not only from my family, but also from my ward members, my neighbors, and my friends. I cannot repay this kindness. This is a rare gift—a glimpse into heaven. I have been able to have a small understanding of the immensity of God’s infinite thoughtfulness and love for me.” After 10 years of being trapped in her body she passed away at age 77 from renal failure. She was preceded in death by her father, mother, and son Michael. She is survived by her husband, David, her children Amy Palmer (Enoch), Jennifer Legas (Adam), Stephanie Blad (Ryan), and James Pollei and her 13 grandchildren, Ezra, Ada, Tenney, and Minerva Palmer, Gunnar, Cooper, Mia, and Kes Legas, Luke, Brinley, Addie, and Milo Blad and Vivian Saffian. Funeral services will be held at 11:00 a.m., Saturday, August 28 at the Riverwoods Ward Chapel, 4775 N. 300 W., Provo, Utah 84604 and a viewing at the church from 9:30-10:45 a.m. Interment at Eastlawn Cemetary following the service. In lieu of flowers, donations can be made in her name through to her gofundme page (https://gofund.me/360b70b4). Condolences may be sent to the family using the “Add a Memory” link on this page.
See more See Less