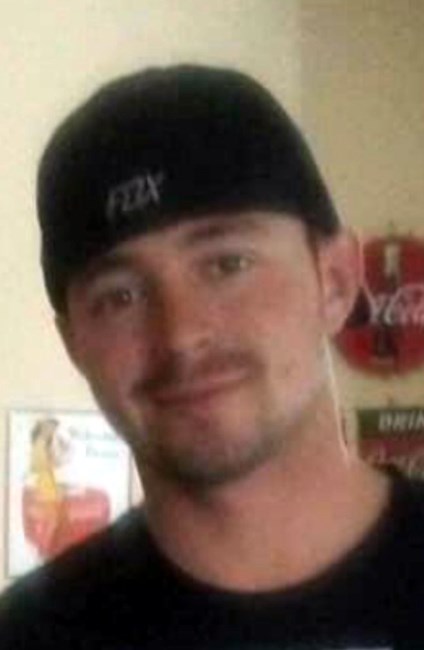 Ryan Scott Burgess, Age 28, passed away May 7, 2022 due to a tragic auto accident. Ryan was born January 5, 1994 to loving parents, Travis Burgess and Marie Jensen. He grew up in Kearns, attended Kearns High, and worked as a glazer for Steel Encounters. The most important thing to Ryan was his family but when he wasn’t spending time with them, he enjoyed Harleys, fast cars, big Dodge’s, and sound systems. Ryan had the most beautiful smile, it was infectious and he gave the best hugs. Ryan played baseball from little leagues to high school and made it to the Allstar State Championships. Ryan was an amazing artist, craftsman and mechanic. Ryan enjoyed the outdoors, camping, fishing and hunting. Ryan was happiest when he was spending time with his dad working on their Harleys or out riding them in the fresh air. Ryan’s favorite baseball coach was his dad. Ryan was a mama’s boy. He loved her cooking, well anyone’s cooking. The first place he would go was to the fridge when he visited. Ryan and his mom enjoyed camping and going for rides on the motorcycles. Ryan’s big brother Josh was his best friend and hero. The two of them enjoyed fishing at the lake, snowboarding and riding their Harleys together. Ryan loved his little sister Rianna. Family vacations with her and teasing her were some of his favorite pastimes. Ryan treasured his niece, Maylee. He was her motocross mechanic. They would spend time washing and working on her bike getting ready for her motocross races. They were kindred wild spirits and he spent time teaching her to ride the one-wheel. Ryan looked forward to spending time with his other nieces also, Juniper and Emma. Ryan felt his biggest accomplishment in this life was his beautiful little girl, Delilah Grace. He longed for the day they could be reunited. LOVE YOU FOREVER!! Ryan took great pride in teaching Destany, Victoria and Maylee how to box. Destany and Ryan had a very special bond. He loved to instigate snowball and water fights. Ryan loved the time he spent with Katie and her 3 girls, Elly, Anna and Beana. Ryan loved to visit his grandparents. Every Monday he would show up at Grandma Sue’s and Grandpa Harold’s for Sunday left-overs. When Ryan walked into Grandma Jackie’s with a bag of fast food, he would bring extra for her and call out “Have you eaten Grandma?” Grandpa Steve and Grandma Shari would have to restock the candy bowl after Ryan left their house with pockets full. Ryan cherished his entire family and friends, even those that passed before him. Brady Archuleta was Ryan’s best friend and after his passing Ryan would take him a beer and visit him on a regular basis. He was such a loving and caring person and will be missed by all who knew him. Ryan is survived by his parents, brother Josh, sister Rianna (Dallin), daughter Delilah, Grandparents, Jackie McCleery, Sue and Harold Bryant, Steve and Shari Burgess. Many cousins, nieces, nephews, aunts, uncles, great grandparents. Preceded in death by Grandpa Neal McCleery, Grandpa Gary Jensen and his very best friend Brady Archuleta.
See more See Less

In Memory Of Ryan Scott Burgess