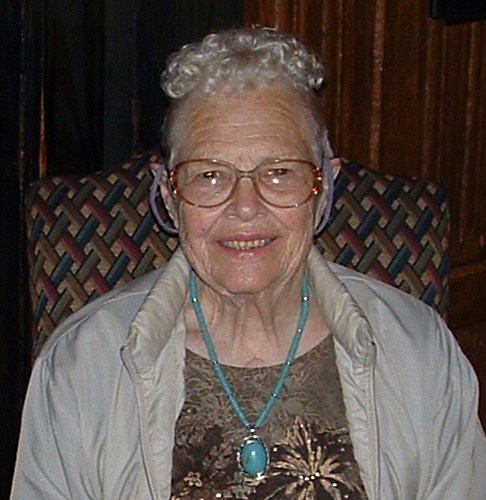 Nora Lee Brown, age 93, passed away on June 10, 2022, in Thousand Oaks, California due to old age and complications related to the COVID-19 virus with her son Gregory Kent Brown by her side. She had been struggling with this for 5 months. She is at peace now. Nora Lee was born May 7, 1929, to Porter Bell Branstetter and Fern Gammell in Los Angeles, California. She had lived in Newbury Park, California for 48 years. She was the mother of four children: Gregory Kent Brown, Mark Everett Brown, Windy Lynn Farnsworth, and Paul Andrew Brown. She had spent 17 years in Canoga Park, California in the early years of raising her children. She was preceded in death by her husband, Donald George Brown, her youngest son (Paul), and her sister Marlene Clement (née Branstetter). She had 7 grandchildren: Matthew Paul Brown, Jordyn Ann Brown, Evelyn Ann Brown, Nicholas Mark Brown, Kimberly Elizabeth Brown, Heidi Lenora Brown, and Camille Emmalee Brown. She had 7 great-grandchildren. She had many friends. She was a special person, dependable wife, inspiring mother, a true friend, and loved by all. She is now with the Lord, her husband (Don), son (Paul), her parents, and sister (Marlene) in heaven. Nora Lee (she sometimes spelled it Noreli so people wouldn’t call her Nora) was a very intelligent, gregarious, tenacious, and multi-talented woman. She was gifted with a beautiful singing voice like her mother (Fern). She studied Mathematics at Colorado State University and BYU. She was a mathematician in the Rocket Business when she met her husband (Don) who was an Engineer at Rocketdyne. She was one of the first computer programmers (before it was a major in college) and did analysis to support the design of the rocket engines that put payloads and astronauts in orbit and put man on the Moon. Except for being an atheist for a short time as a child when she first learned about dinosaurs, she was a strong Christian of prayer and Bible study throughout her life. She told her children the Christians will meet in small numbers in the latter days, and so didn’t follow any denomination—she told her children they were Christian and not affiliated with any denomination. She inspired her children to trust Jesus Christ. When she met her future husband at Rocketdyne, she found they had many things in common: skilled in music (Don played the trumpet), liked camping, prospecting for gold, going to sports car rallies, skilled in science, and hardworking. Don was quiet with a subtle sense of humor and a fine artist and sculptor—his drawings were amazing. Nora Lee was extremely outgoing with much spirit. They were married May 9, 1953, at Our Savior's Lutheran Church, Long Beach, California. After having twins with her second pregnancy, she stayed home to raise her children. She took night classes at Pierce College to study electronics. She taught her young children how to solder electrical circuits at a young age. She was the first in the neighborhood to have a stereo that she built from a Radio Shack kit. She used this to teach her children to appreciate all kinds of music including classical, Broadway musicals, and jazz. She taught her children all the tricks of mathematics so they would do well in school. All four of her children studied engineering at California State Polytechnic University, Pomona. Three graduated with Bachelor of Science degrees. She said many times, “all my children were born on perfect squares: the 1st, the 4th, and the 16th of the month.” The youngest, Paul, was killed tragically October 20, 1984, in a dune buggy accident in Apple Valley, California during his junior year at Cal Poly. Paul was born with club feet and became a fine trumpet player (following in his father’s footsteps). One of her children graduated from the Massachusetts Institute of Technology with a Master of Science Degree. Nora Lee was a “band mother” when Paul played trumpet in the middle school and high school bands. She took her children (along with all the neighbor kids) to the museums many times. Whenever they went to the museum on a field trip at school it was review because they had already gone—they could lead the tour. All the children in the neighborhood remembered Nora Lee for her parrot (a Blue and Gold Macaw named Nicki) and her coin collection. She inspired her children, and at least one neighbor boy to go into coin collecting. Until the 1970s, when her boys wanted to grow long hair to be like the hippies, she gave all her boys crew cuts and flat tops. A few times she gave two a mohawk haircut before the punk-rockers were doing it. Nora Lee loved to cook—leg of lamb, beans and ham hocks, and corned beef and cabbage were favorites. She had a pressure-cooker for canning. She liked to sew and used a Husqvarna sewing machine like her sister Marlene. She loved animals of all shapes and colors. When her children brought home snakes as pets, she let them keep them. The Brown menagerie included: dogs (including 2 litters), parrots, Iguana lizards, desert tortoises (including hatched eggs), horn toads, snakes (including hatched eggs), rats and mice to feed the snakes, chuckwalla lizards, a baby alligator, tarantulas, a scorpion, a beehive, mallard ducks, and a turkey. Nora Lee didn’t like cats. Nora Lee and her husband loved to travel, take their dogs (Ginger and Skip) to the dog park, the beach, and to car shows in their golden years. A celebration of life memorial service for Nora Lee Brown will take place at Pierce Brothers Valley Oaks, 5600 Lindero Canyon Road, Westlake Village, California 91362, (818) 889-0902, on Monday, June 20, 2022 at 10:00 AM to 11:00 AM (PT). A reception will follow from 11:00 AM to 1:00PM (PT). https://www.dignitymemorial.com/obituaries/westlake-village-ca/nora-lee-brown-10788714 If you can’t attend, the memorial service will be streamed at Nora Lee’s Facebook page. https://www.facebook.com/NoreliBrown For those wishing to make donations, please do so to Ventura County Animal Services. https://www.vcas.us
See more See Less

In Memory Of Nora Lee Brown