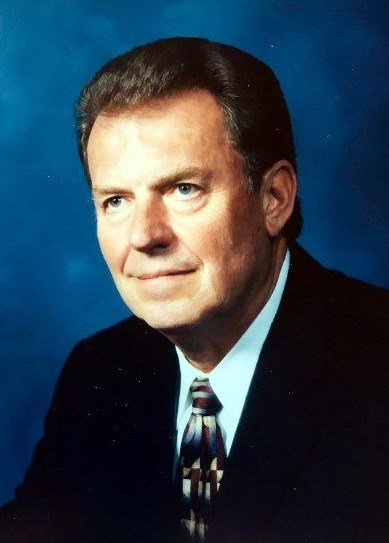 Philip L. Anthony, 82, passed away Thursday July 26th surrounded by his family at his home in Fallbrook, CA. He is survived by his wife Carolyn of 51 years; daughter Dionne Anthony and son Derek and his wife Sheryl of Carlsbad, CA; and, the newest addition to the family, grandson Fitz Philip Anthony born to his son Philip and longtime girlfriend Jamie Bankus of Costa Mesa, CA. He was preceded in death by his beloved son Gregory Anthony in 2003. A loving husband, father and grandfather, Phil was a longtime resident of Orange County, CA with a storied career in business and community service. Born in Clinton, Iowa on September 22, 1935. The family relocated and settled in Westminster, CA where Phil would later graduate from Huntington Beach High School in 1952. He went on to receive a Bachelor of Science degree from Cal State University Long Beach in chemistry and a Master of Science degree in physical chemistry from the University of Hawaii. Phil first worked in aerospace engineering and program management at Rockwell International Corp., where he received a NASA Technology Utilization Award and was granted two U.S. patents. During this time, he was elected to the Westminster City Council in 1962, where he served until 1976. He served as the city’s mayor from 1972 through 1976. He was then elected to the Orange County Board of Supervisors where he served from 1976 to 1981 and was board chair in 1979. He also served on the boards of the Orange County Sanitation District, the South Coast Air Quality Management District, the Southern California Association of Governments, and the Orange County Local Agency Formation Commission. Phil was elected to the Orange County Water District (OCWD) Board of Directors 1981. During his service of nearly 37 years on the board, Director Anthony played an important role in pioneering projects that have now become standard water industry tools to combat drought and water shortages. One of his most significant contributions to Orange County and the water industry at large, was his unwavering support to build the Groundwater Replenishment System (GWRS), which came online in 2008. It is world’s largest advanced water purification project of its kind. Phil was a recipient of the E. Benjamin Nelson Government Service Award from the Groundwater Foundation. The prestigious national award honors and recognizes a public official who has significantly advanced environmental and groundwater stewardship. Most recently, the California Sierra Club Political Action Committee presented him with the 2018 California Taking the Lead Political Leadership Award. The award honored four environmental heroes who have worked and voted consistently to protect the environment. He also authored several scientific and technical publications and was widely sought out for local, national and international speaking engagements as an expert on advanced water purification. Environmental stewardship is something Phil strived to instill in the future generation. He founded the Orange County Children’s Water Education Festival in 1996. The first festival served 500 Orange County students. Today, the event, co-hosted by the Disneyland Resort and NWRI at the University of California, Irvine, has grown to serve 7,000 students annually. Phil once said that “It will be the children who play the vital role in preserving our natural resources in the future.” Phil was a passionate supporter of the Westminster Boys & Girls Club serving as a longtime board member. He is also a Kiwanis Club member. In 1981, he founded and acted as president of Philip L. Anthony, Inc., a real estate development and independent public affairs and management consulting firm. Phil relished time with his family at their avocado ranch in San Diego county and their rugged mountain retreat in the Sierra Nevada. Throughout his life, he enjoyed offshore fishing, sailing, running and tennis. A Celebration of Life is scheduled for 4:00pm August 19th at The Rose Center in Westminster, CA.
See more See Less

In Memory Of Philip LeVern Anthony